I was all set to blog about social media this week, but instead, will focus on integrity, as that is the single word that comes to my mind when I think about Jack Layton, and what a sad day it was for Canada yesterday, August 22, 2011, when the leader of Canada’s Official Opposition Party (the NDP) passed away after a relentless battle with cancer. 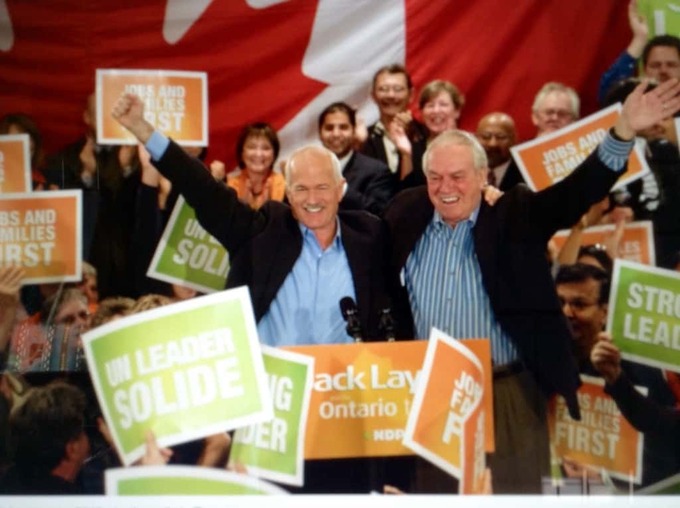 Cancer has touched my world many times, having lost my mother to the disease in January of 1970, and many other friends and family members in the 40+ years since her passing.

Jack was a tough fighter. He wouldn’t give up or give in to his evil invader. He kept fighting, ensuring us that he would be back, and that he would beat the heartless disease. But that was not to be. So nearly every Canadian paused yesterday to reflect on what a difference the leader had made on our contemporary society.

I envy the dozens of Canadians who have been sharing their personal stories of encounters with Jack. I never had the pleasure of meeting him. But I always admired him, and he inspired me countless times. He cared about the environment, the homeless, and above all, fairness and equal rights for all.

He was fit, riding his bicycle whenever possible, and fun, enjoying music and frivolity as much as a good debate. And until his final public appearance when he stepped down from his position in order to take treatments and beat his disease, he always looked debonaire and youthful.

I am most impressed by Prime Minister Harper’s office for agreeing to make Jack Layton’s memorial service in Toronto on Saturday, a state funeral. No other man or woman deserves more respect than Jack Layton. He devoted his entire life to public service, and was never afraid to stand up for the underdog. Heck! He himself was the underdog who blew the Liberal Party out of the water in Canada’s last federal election on May 2, 2011, elevating the NDP (for the first time ever) to the status as the country’s second most powerful national party.

Having said that, when I think of Jack Layton, time after time, the single word that comes to mind is INTEGRITY. He lived it, breathed it and even died by it, leaving us with a compassionate letter to inspire and comfort us as we move forward without him. If you haven’t already read it, please take a moment to do so.

And then, please share with us. What did Jack Layton mean to you? To your constituency (whether a political constituency or a demographic group he may have helped or inspired?)

My husband, Reg, is quite a political animal and has gained inspiration from many politicians over the years. For some reason, he doesn’t seem to be a Layton fan. I think he’s more inspired by the tough guys like Harry Truman and Winston Churchill. But me … I am most grateful that I had the opportunity to be inspired by Canada’s single most Man of Integrity.

Let’s reminisce about how lucky we Canadians were to have been inspired by a man named Jack Layton.