We’re continuing our quest to take in as many Interlake events this season as possible. The Bucket List of things to do in Manitoba’s Interlake Region is slowly shrinking!

The Viking Re-enactment at the Gimli Icelandic Festival and the Re-enactment of the Signing of Treaty One at Lower Fort Garry are amazing events, and reinforced the enhancing factor that re-enactments can bring to any historic venue.

I’d been to both these venues before, but not for a long time. The Viking Village you will find on the shores of Lake Winnipeg–just steps from the glorious Viking statue in Gimli–was added to the Gimli Icelandic Festival (officially known as Islendingadagurinn) several years ago, and what a welcome addition it is! 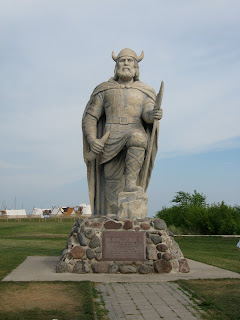 The Viking statue in Gimli is a landmark of this beautiful harbour town.

There are approximately 90 “Vikings” within the Viking village, who are in effect, Viking enthusiasts from throughout North America who make their way to the Gimli Icelandic Festival and other similar events to act out various aspects of Viking life from the days of Eric the Red and Leif Ericson (Old Norse: Leifr Eiríksson) as members of Vikings Vinland. They actually live on the site for the week of the festival and are not paid staff, but rather real people who, for that moment in time, are living as the Vikings would have lived.

It’s really fascinating watching them roast rabbit over an open fire, grind wheat into flour, carve wood, sew leather, spin-weave in just the fashion used by Vikings, Saxons, Normans, and Celts of the 10th century. Learn more about this group of crafty individuals known as Vinland Vikings here. They are part of a global network said on their brochure to be “the oldest and largest Dark Ages living history society in the world.” It’s free to attend the Viking Village in Gimli and well worth your while. Plan on it for the August long weekend every year. More on the Gimli Icelandic Festival at: www.icelandicfestival.com. 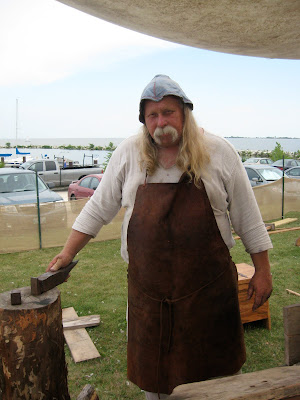 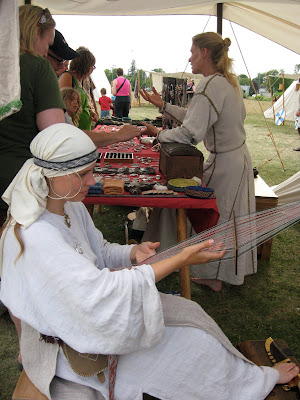 Our next experience with re-enactors was at the Lower Fort Garry National Historic Site. Our timing was impeccable as we had the pleasure of not only visiting all the permanent buildings in the fort, but also witnessing some amazing aboriginal dancers and a play written by award-winning playwright, Ian Ross to commemorate the signing of Treaty One in 1871 between the Ojibway, Swampy Cree and the Crown. 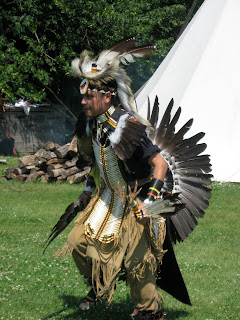 Lower Fort Garry was built on the banks of the Red River north of Winnipeg during the 1840’s and encompasses more than a dozen buildings. Learn how blacksmithing, weaving, and other 19th century daily tasks were done by a troop of well-trained re-enactors who make you think that you have stepped back in time as you explore the lovely grounds. The re-enactments at Lower Fort Garry are performed by paid staff of Parks Canada who do a great job of stepping into their roles. 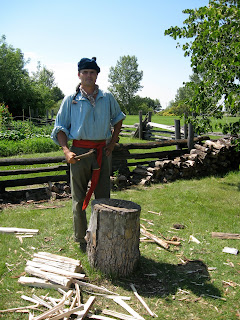 We ended our visit with a late lunch at the terrific Riverview Cafe, right on site at the fort. They try to feature local specialties and produce. The pulled pork was terrific. Find out more about Lower Fort Garry National Historic Site of Canada online at: www.pc.gc.ca which is the site for Parks Canada. Search Lower Fort Garry for rates and hours.

Have you experienced any historic sites at which re-enactors made the difference in bringing the period to life for you? One of our favourites is the Fort Louisbourg Historic Site in Nova Scotia, but these two Manitoba sites I’ve mentioned are every bit as engaging.

Enjoy the rest of your summer. Looking forward to hearing from you, and to seeing what trail you will be following this summer.