Toastmasters can and will make you a better person

I attended a professional development session in which I was asked, “Why did you join TM?”
I answered, “Because over the years, several terrific people had suggested I join. And I knew that an organization that would attract such positive and focused individuals was an organization that would be worthwhile.” I was right. I’ve been a member of Toastmasters International since 2001 and have enjoyed every minute of it.  If you’re not a member but are thinking about it, visit TI’s website and search for a club near you.
http://www.toastmasters.org
My recommendation is to interview or test drive at least 2 clubs before joining, as part of your success as a toastmaster will be directly related to your own success in hooking up with the right club. (Each one has a unique personality and style and there are now quite a few special interest clubs.) You can generally attend up to 3 meetings at a club before you will be expected to join.
Another session I attended at this weekend’s conference had us rowing imaginary rowboats and singing simultaneously. Hats off to Diane McCoy for leading an amazing session on “The Spark of Possibility.” Diane’s presentation was inspired by a book by Rosamund Zander called “The Art of Possibility: Transforming Professional and Personal Life.”  It sounds like a terrific book and gave us plenty of insights into our own leadership styles. 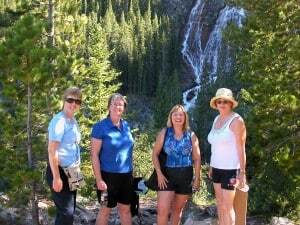 The Toastmaster who has probably had the most influence on my life as a member of this great organization is Bev Doern. It was Bev who encouraged me to join the Prairie Voices club back in 2001. It was Bev who mentored me, encouraged me and inspired me to take in all this wonderful organization has to offer. And it is Bev who continues to amaze me in her dedication to improving her own speaking and leadership skills while continuing to work on behalf of the District and her four clubs. (You can belong to as many TM clubs as you have time for, and Bev, despite being a wife and daughter, the mother of 2 teenage daughters, an aspiring artist and holding down a position of considerable responsibility has managed to find time for 4 TM clubs. And not just as a bystander. She holds an executive position in more than one of those clubs.)
So when we talked about leadership styles in Diane McCoy’s session, I said I lead through enthusiasm. My enthusiasm seems to carry me through most tasks and I try and transfer that enthusiasm onto my team. Bev leads by example. She works hard and diligently on any task before her. And she always acknowledges everyone who helps her along the way.
I do my best to emulate Bev’s style as it has had such a positive impact on me. What style of leader are you?