winnipeg has a strong fan base for professional sports

A huge congrats to the Winnipeg Jets hockey team for making the 2018 NHL playoffs! Fans in the Manitoba capital have not seen big-league playoff hockey since 1996, and they have been going crazy with anticipation, as the Jets geared up for the first round of playoffs. Unfortunately our team did not make it to the Stanley Cup Finals, but the did us proud nonetheless. Also high on the sports front is the fact that Winnipeg will have a professional soccer team in the Canadian Premier League beginning in 2019, the Valour FC. Exciting! 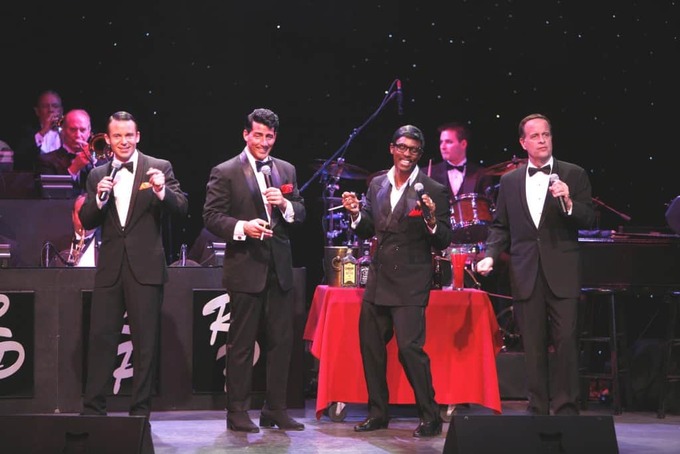 The cast of The Rat Pack is Back!

Whether you’re a hockey fan or not, you can’t help but feel the excitement. The subject even came up at yesterday’s performance of the Winnipeg Symphony Orchestra (WSO) where the Rat Pack is Back! re-enactors dazzled the crowd with songs from Frank Sinatra, Sammy Davis Jr., Dean Martin, and Joey Bishop look/sound alikes. It was a most enjoyable concert.

I love the way the WSO has created an assortment of concert series to appeal to different kinds of music lovers. There is the traditional Classics series in which you are exposed to an array of classical music from composers that include Tchaikovsky, Rachmaninoff, and Handel. There are also Kids Concerts and WSO Music Festivals. And there is the Pops series of concerts sponsored by Air Canada.

I really love the Pops series because it provides you with a little bit of everything. Next season’s Pops looks like a winner, with the Best of Rufus Wainwright, Cirque Mechanics that features some dazzling acrobats and contortionists performing to the an assortment of classical masterpieces, and the one I’m really excited about … Sgt. Pepper’s Lonely Hearts Club Band next April, in which a fresh treatment of Beatles favourites will undoubtedly take me and the rest of the audience on a wonderfully colourful ethereal journey!

Another one of my favourite cultural indulgences in Winnipeg is Prairie Theatre Exchange (PTE), where I’ve had season’s tickets for a number of years. You get so close to the performers at PTE that you can practically touch them in the intimate setting of the 323-seat theatre. Quite different than the more elaborate performances staged at the Royal Manitoba Theatre Centre. I could go on, but I think you get the picture! Winnipeg is a small city with a big appetite for all things cultural.