it’s all about Margaret

This post is a tribute to my mother, Margaret who died in January, 1970. I update and circulate this post every year on Mother’s Day, although it was first written and posted in 2010, as I reflected on life without her over the 40 years that had passed.

I had had a handwriting analysis and projective personality assessment done that year by Annette Poizner of Toronto, she stressed the importance of the number 40 at the time of her analysis. It was this post written on Jan 23, 2010 on the fascinating subject of graphology that brought Dr. Annette Poizner into my life. She contacted me after finding my blog via a keyword search.

Poizner told me that 40 is an extremely powerful number in our personal development in that we are “ripe” by age 40 and ready to cultivate new skills we may have been pondering for years. We are ready to take on new challenges and forge a new path. She said that it was very significant that I was having certain dreams at the time we crossed paths as they were connected to my mother, who (Poizner believes) had chosen to forge a deeper presence in my conscious life after being absent from my side for the past 40 years. And it was precisely 40 years to the day following my mother’s death that I made the blog post that brought Poizner into my life — on the precise 40th anniversary of the death of Margaret Ann Herneshen. 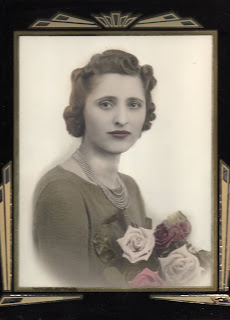 This picture was taken of my mother (and colourized by my father) sometime around 1940. There goes that number 40 again …

I won’t go into details about the personality analysis, but will tell you that 2010 has indeed been filled with people and images that have reinforced my mother’s presence and importance in my life now more than 40 years since her passing.

At the family reunion I wrote about in a previous post on this blog, I met a woman named Doreen Musick, who had been a good friend of my mother’s in her younger years.

Meeting Doreen made me wonder whether I have been named after this lovely woman, as she is the only Doreen I have encountered who knew my mother and father. I am pictured with her below. 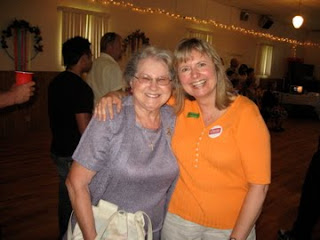 I then had lunch with Valerie, one of my mother’s cousins whom I had not seen since I was a young child. She contacted me after reading an article I had written in the CAA magazine. Val came to the lunch with an envelope full of pictures of my mother and family from the early years. How enjoyable that was, to go through these pictures and share family memories with someone who knew and loved my mother.

This 40th anniversary of my mother’s passing was enriched with the joy of finding and reconnecting with people who knew and adored her positive nature, love of beauty and nature, infectious laugh, warm embrace and welcoming smile.

As I remember my mother in honour of Mother’s Day and approach the 50th anniversary of her passing, I can only hope that I am half the woman she was, and offer a tribute to all the great mothers of the world.