Attending the 2009 World Chocolate Masters Championships (WCMC) in Paris was the catalyst around which we planned the remainder of our trip to Europe that fall. Imagine being among the top chocolate creators of the world (some of whom were serving as judges, some were participating in the competition, and others were offering demonstrations and meeting members of the public upstairs at the Salon du Chocolat, the massive chocolate event for consumers (i.e. chocolate lovers.) It was quite the experience! We were indeed big kids in the world’s biggest candy store! But this show is unquestionably for big kids, although there were a few privileged tiny tots in attendance. 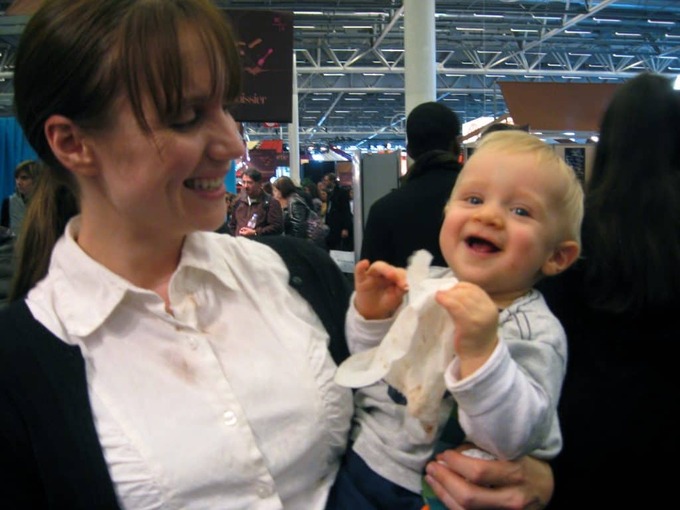 Even babies enjoy being wrapped in the excitement of the Salon du Chocolat.

To clarify, the WCMC is a trade show and competition for those working in the chocolate industry. We were allowed entrance via pre-screened media badges we had been awarded. Congrats to a young Japanese chef for taking first place, Lionel Clement who makes his chocolate creations at the Wynn Hotel in Las Vegas took second place, and a woman — Michaela Karg of Germany took third place. It was nice to see a woman in the top rankings as chocolate is definitely a male-dominated profession — despite the fact that women purchase and consume 80% of the world’s fine chocolate.
The Salon du Chocolat is held in the same venue as the WCMC and is open to all chocolate and cocoa enthusiasts. It not only offeres a huge selection of chocolatiers from most parts of the world, but also other forms of candy such as nougat, macaroons and desserts as well as products that complement chocolate such as spices, liquors, and kitchen equipment and tools to assist you in your candy making pursuits. What a tasty experience!
We were pleased to visit the Bailey’s tasting booth more than once and especially enjoyed the coffee flavoured Bailey’s. It definitely goes well with chocolate. We also really enjoyed the chocolate fashion show! Yes, that is haute couture adorned with real chocolate! 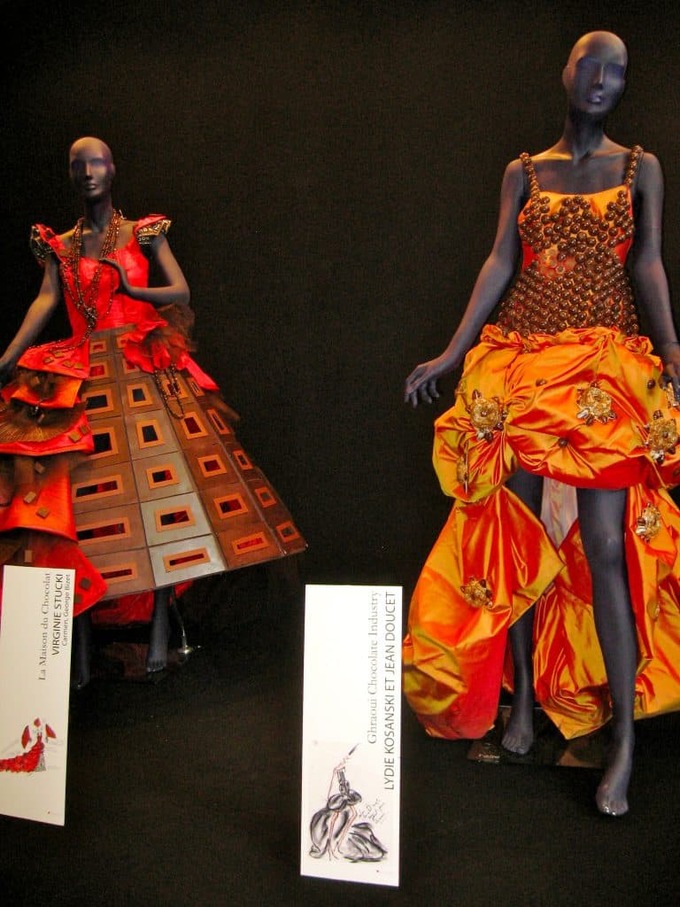 There was an amazing haute couture fashion show at Salon du Chocolat in which the garments were adorned with real chocolate!

With more than 400 exhibitors, there is something for everyone. Watch a video showing the finest in chocolate couture, see a listing of world chocolate shows and learn more about the Salon du Chocolat here.
The World Chocolate Masters Championships were last held in Paris, October 31- November 2, 2018. The Salon du Chocolat will next be held in Paris, October 30 – November 3, 2019 and is an annual event. Consider attending if you want to push your senses, as the world of fine chocolate is filled with adventure and sensuality. This is the premise of volume I of my book, Chocolatour: A Quest for the World’s Best Chocolate and what drives me forward in my continuing research.
Share
Tweet
Pin
Share