I’ve been going to Gimli, Manitoba ever since I was a small child, as my father’s only sister lived there with her family. Until I was an adult, this small lakeside community of nearly 6,000 people simply represented a place where I had family, and where we spent many summer days walking the pier or trying to swim in the cool waters of Lake Winnipeg after tiptoeing over the stones of the pebbled beach that lines the shore. 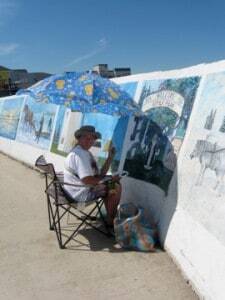 a muralist touches up her masterpiece on the Gimli pier

As a travel and lifestyle writer, I began to look at Gimli through a different lens. It is a proud community with a strong heritage and a vibrant arts community. As the sixth-largest freshwater lake in Canada, it is the immenseness of Lake Winnipeg as an inland ocean that draws a great number of creative individuals to the Interlake region, with Gimli as the hub. Writers, artists, musicians, performers, and photographers come to the Gimli area to congregate, live in harmony, be inspired, and enjoy the affordable standard of living. My husband and I now live just 20 minutes from Gimli and for the past six years, have called the Interlake home.

There are many reasons you may choose to put Gimli on your horizon, whether as a visitor, or as a possible future resident. I’ve listed a few, with hope we might  see you there this year.

1. Gimli has the largest number of residents of Icelandic heritage in any community outside of Iceland. The New Iceland Heritage Museum is an excellent facility that celebrates the town’s Icelandic and Ukrainian settlers whose hard work and joint efforts helped make a good life for farming and fishing families. Tergesen’s General Store has an excellent book shop that offers many books about Iceland and Manitoba and predominantly features books authored by local writers. Tergesen’s is a big supporter of local culture and regularly  holds book launches and events to spotlight local authors at the historic A-Spire Theatre.

2. Gimli’s strong interest in film and culture makes it a perfect place for a film festival. The Gimli Film Festival runs from July 22-26 in 2015 and will showcase more than 130 feature films, documentaries, and shorts from around the world. Where else can you sit on the beach and watch a film under the moonlight on a 35×10 -foot movie screen suspended over the water? 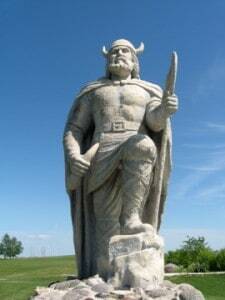 3. The Gimli Icelandic Festival formally known as “Islendingadagurinn” has been held in Gimli since 1932 and continues to reinvent itself. We really enjoy the Viking Re-enactment Village that draws re-enactors from around the world to setup a Viking village on the shores of Lake Winnipeg in Gimli and live like the Vikings did 1,000 years ago. The Gimli Icelandic Festival always runs on the August longweekend and is scheduled for July 31- August 3, 2015.

4. Gimli has a thriving artistic community. The A-Spire Players provide live theatre performances at the A-Spire Theatre every week through the summer, and on occasion, the rest of the year. There are also many book launches and literary events held at the historic theatre (which was once a church.) As well, Gimli and area is home to many painters and artisans who participate in the semi-annual WAVE Interlake Artists Studio Tour held each June and September. Gimli is even home to the Toastmasters in the Arts club, a Toastmasters club devoted to people in the arts.

5. Gimli is a beautiful sailing community and has a scenic harbour where you can dock your boat, or stroll along the pier and look at the art and the boats  harboured there. You’ll even find people fishing off the pier, and be sure to give yourself time to enjoy the beautiful murals (pictured above), that you’ll see lining the concrete windbreak built to prevent the waves from washing over the pier. 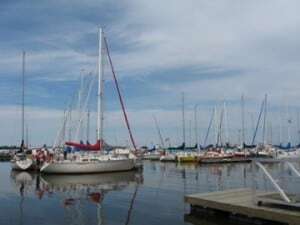 Gimli harbour is lovely and peaceful

6. Gimli is a fair trade community. Gimli is the 1st in Manitoba and 6th community in Canada to become a certified fair trade community. To qualify, local leaders must pass resolutions to support fair trade initiatives, local retailers must offer a wide range of fair trade products, and the community must host events that promote the fair trade movement. Drop into the Fresh Carrot while you’re in town for a good selection of Fair Trade goods, including some great Camino Chocolate.

Have you been to Gimli? What strikes you as being special, unique, or quirky about the place?