knowing which conferences to attend can be a challenge

It’s conference season! For me, it’s never about whether I will attend conferences. It’a about which ones to choose!

As an active freelance writer (I celebrated 20 years in the freelancing business in April, 2013), I belong to a number of professional associations — most of which have spring conferences. Earlier this month, I attended the District 64 Toastmasters Spring Convention in Winnipeg. I’ve been a Toastmaster since 2001 and have learned so much from this great global network of public speaking enthusiasts. I recently helped launch a new Toastmasters club in my own community specifically for members of the arts community as we have an abundance of writers, artists, performers, and other creative individuals in the Interlake region of Manitoba. It was great re-establishing friendships, picking up tips, and being inspired by keynote speakers such as world champion Lance Miller at the TM conference. 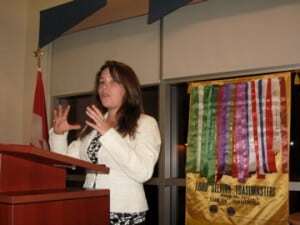 As a longtime member of the Professional Writers Association of Canada (PWAC), I don’t think I’ve missed one national conference since joining in 1997 (other than the conference in 1997 which was held within weeks of my joining.) I’ve been an active member of PWAC ever since joining and currently serve as the national vice-president. PWAC helped build my career as a professional writer and gave me a strong foundation to make sound business decisions. I’ve always believed that every freelance writer in Canada should be belong to PWAC. I will attending the PWAC national conference in collaboration with MagNet in Toronto June 4-7th, with a day of meetings beforehand. Writers conferences help build our careers and strengthen our vision.

Three years ago, I joined the Writers Union of Canada (TWUC), a strong national association for Canadian book authors. I’m slowly getting to know the membership and am learning from their diverse knowledge. There are 2,000 members in TWUC compared to the 700 in PWAC, so I find the organizational culture to be quite different. There are many differences between TWUC and PWAC, yet many  similarities. TWUC is celebrating its 40th anniversary this year at the national conference in Ottawa May 30-June 2nd. I will be there.

That was a difficult decision for me to make, as I’d originally signed up to attend the Travel Bloggers Exchange (TBEX) conference being held in Toronto June 1-2. I figured that since I had to be in Toronto June 3rd for PWAC meetings, I may as well attend TBEX and get to know more travel bloggers. But once I read the TWUC conference program more closely, I realized that I am primarily a book author who blogs, rather than a blogger who may some day write a book.

And as many key presentations and discussions at the TWUC conference will centre around self-publishing, that was the tipping point in my decision to attend as I am self-publishing my book, Chocolatour: A Quest for the World’s Best Chocolate, which I hope to have published in late June.

Have you been in this situation before? Has it been difficult deciding which conference or professional development events to attend? I’m hoping that my intuition is right, and that making the decision to attend the TWUC conference was the right one. But with all the TBEX hype happening online right now, I wonder …

And if you think that’s not enough, I’m also attending the Travel Media Association of Canada’s (TMAC) national conference in Saskatoon, Saskatchewan from June 12-15. I’ve been a member of TMAC since 1998 and felt it was important to attend and support the Prairie region, plus I had the good fortune to be a speaker at the PWAC event in Saskatoon last fall and really fell in love with the city. Looking forward to a repeat visit to the Delta Bessborough, one of Canada’s premier hotels. 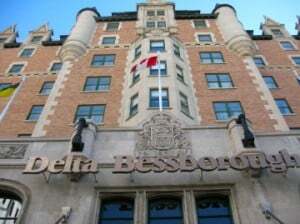 the Delta Bessborough hotel in Saskatoon is one of the stately Canadian Pacific (CP) Hotels that was built in the early 1900’s.

After the busy conference season, I hope to remain in Manitoba for much of the summer, promote Chocolatour locally and online, and then get back in the saddle in September when my research and events bring me to San Francisco and Los Angeles for you guessed it … more chocolate.

Please share your thoughts on attending conferences. Has something incredible happened to you at a writers’ conference or any other conference that wouldn’t have, had you not been at the right place at the right time?