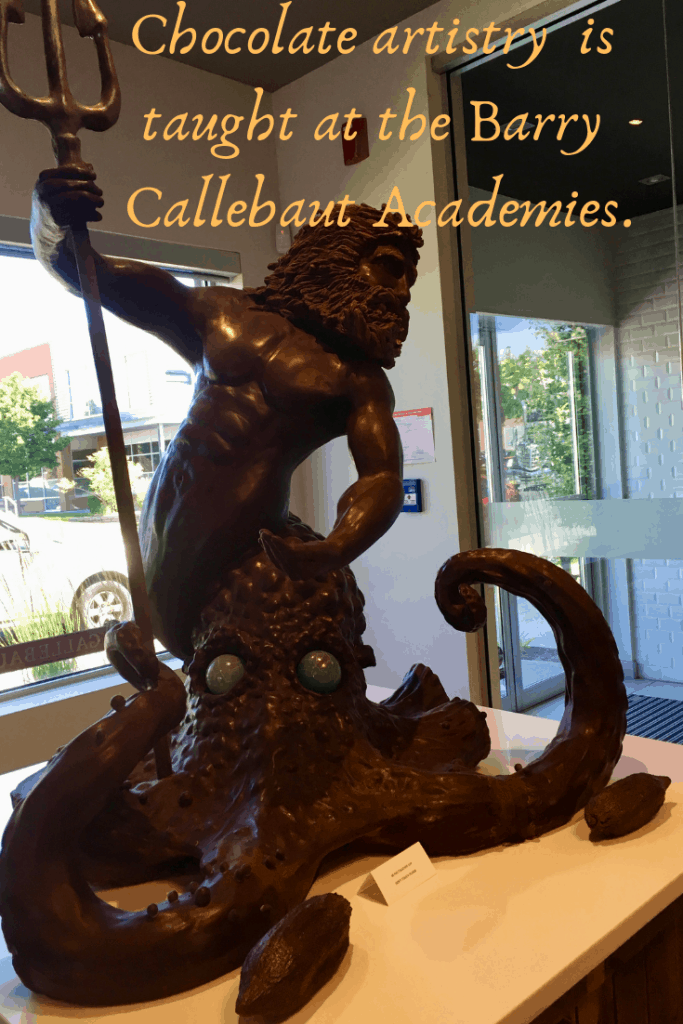 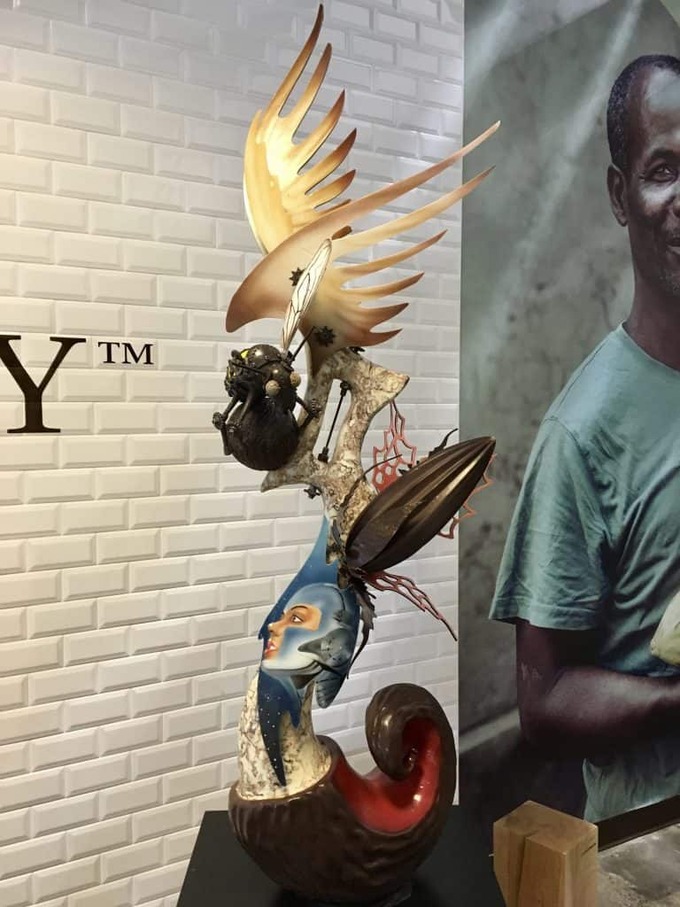 The Barry Callebaut Group focuses jointly on innovation, education, and sustainability in the world of chocolate and cacao

In this post, we are focused on the Barry Callebaut Group, with 53 factories worldwide that process 1.8 million tonnes of chocolate couverture for chocolatiers, pastry chefs, hotels, restaurants, and catering companies around the world. So without knowing it, you have almost certainly eaten a chocolate bar, creation, or dessert made from the BCG’s extensive product line that includes the Cacao Barry, Callebaut, Mona Lisa, and Van Leer brands. 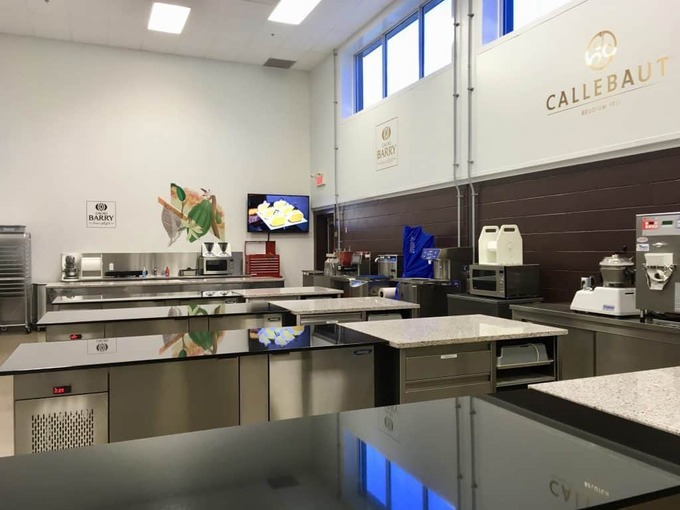 The kitchen at the Barry Callebaut Chocolate Academy in Montreal is where many Canadian chocolatiers learn about chocolate.

But the BCG is not just about producing good quality chocolate. The conglomerate has invested millions of dollars to educate chocolate professionals who use their products, and has taught more than 115,000 cocoa farmers around the world how to grow and process their cocoa beans in order to achieve the finest quality possible. By increasing the quality, the farmers are able to charge more for their beans, and ultimately improve the standard of living for their families. These are the components necessary in creating sustainable chocolate. The Barry Callebaut Group is committed to making sustainable chocolate the global norm by 2025 and has confirmed that the BCG product line is currently at about 35% sustainable, with that percentage increasing each year.

In September, 2017, the BCG introduced a fourth type of cocoa–Ruby Chocolate–a pink-toned chocolate created through a special processing of Ruby cocoa beans. I have yet to try it, but there has been a considerable amount of media announcing it. 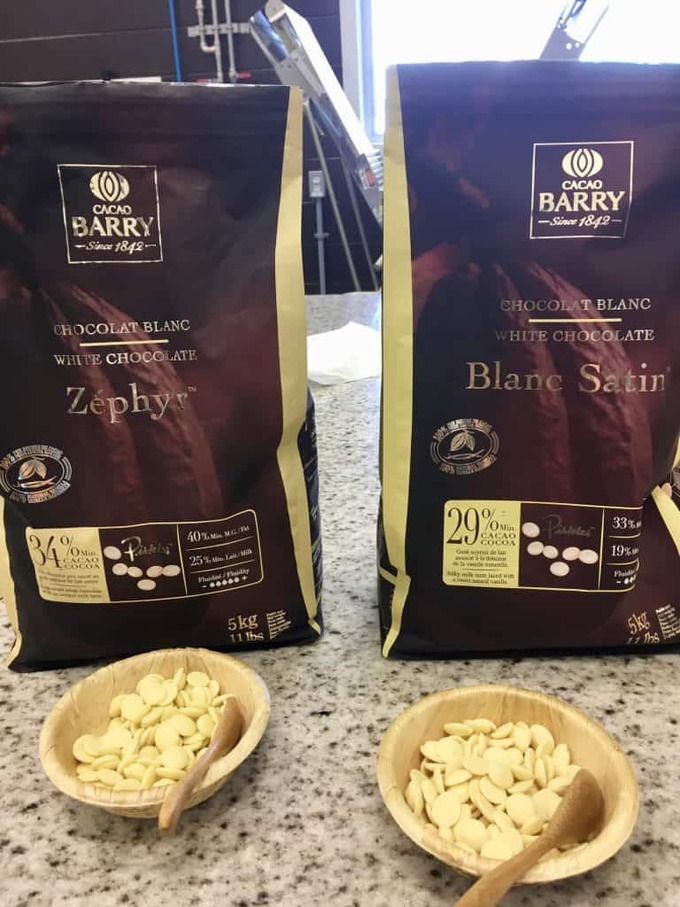 In the old days, couverture (the small disks you see in the bowls) just came in dark, milk, or white chocolate. Today’s chocolatiers have an extensive number of choices to help them achieve the precise flavour they are seeking for their chocolate creations, as you can see here with two white (blanc) chocolate couvertures, one at 29% cacao and the other at 34%, each with its own distinct flavour profile. 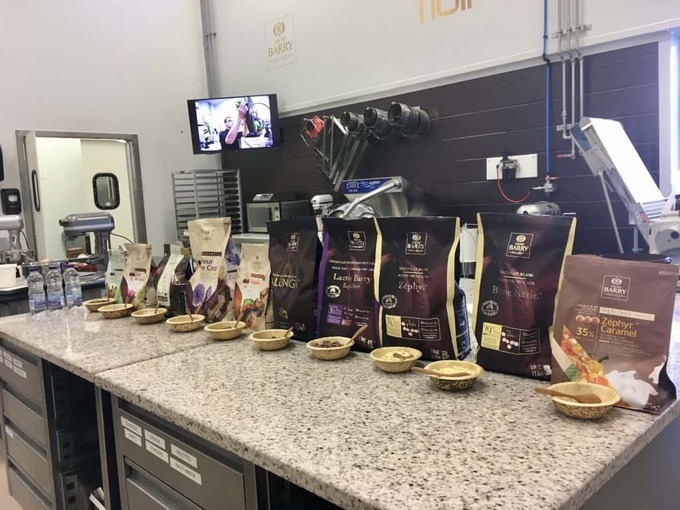 We enjoyed tasting all the different types of Cacao Barry couverture that chocolatiers can use to make their own unique chocolate creations.

Montreal is home to Canada’s only Callebaut Chocolate Academy

A Barry Callebaut production facility is located in St. Hyacinthe, Quebec, 60 kilometres east of Montreal. With about 500 people on staff just at this location, it is considered one of the largest chocolate factories in the world. There is also a Barry Callebaut production facility in Chatham, Ontario, Canada, and two in the US–one in American Canyon, California, and one in Chicago, Illinois, along with a new warehouse in Bethlehem, Pennsylvania, to handle distribution to the American East Coast. 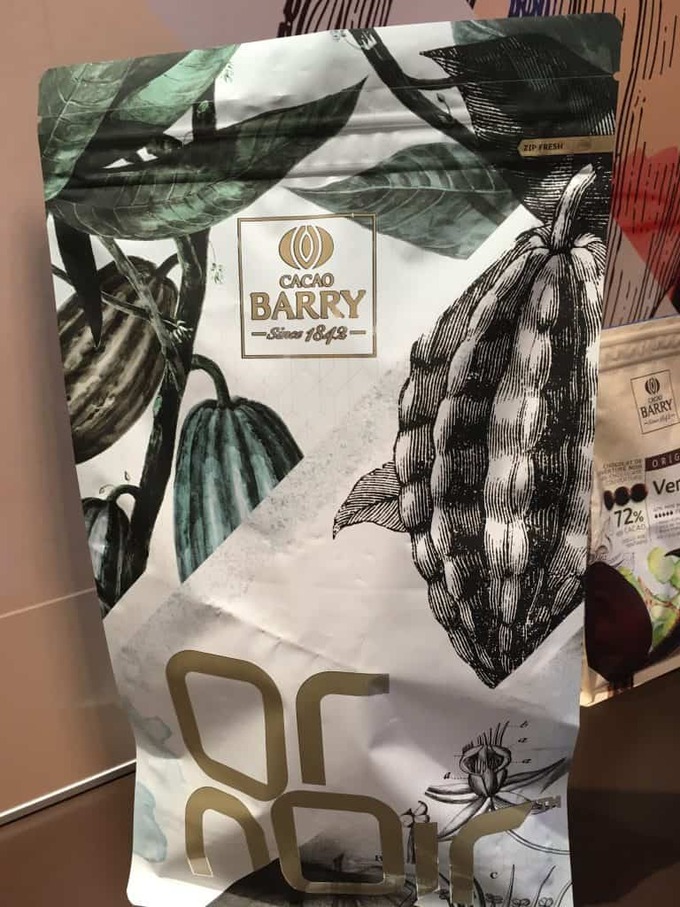 The Or Noir custom couverture packaged under the Cacao Barry brand is a unique offering from the Barry Callebaut Group.

What impresses me most about the Barry Callebaut Group is that they have found a way to bring chocolatiers one step closer to the bean-to-bar experience. Produced under the Cacao Barry brand, BCG’s new custom initiative for chocolate professionals called Or Noir (meaning Black Gold) enables chocolatiers to work with the company’s chocolate lab in Paris to blend an absolutely unique blend of origins to create a signature chocolate that the chocolatier will use to create his/her own (almost) bean-to-bar chocolate bar. I talked about this in the post about Adorable Chocolat of Shediac, New Brunswick, who launched their signature Scorpion Bar in February, 2017, with the help of the Cacao Barry team of taste experts.

So when you hear the word ‘Callebaut’ associated in the world of chocolate, listen carefully, as it can mean a host of different things to different people. But what it does mean without a doubt, is great tasting chocolate with an increasing consciousness towards innovation and sustainability.