A visit to Eastern Cuba would not be complete without a visit to Santiago de Cuba, Cuba’s second largest city located 134 kilometres southwest of Frank Pais International Airport in Holguin. Santiago de Cuba (‘Santiago’ to Cubans) is known for a myriad of things, but the two that stand out is that it was home to Compay Segundo, founder of the Buena Vista Social Club (Cuba’s best known contemporary music collective) and it was also here in Santiago that Fidel Castro launched his War of Independence–the Cuban Revolution–in 1953. 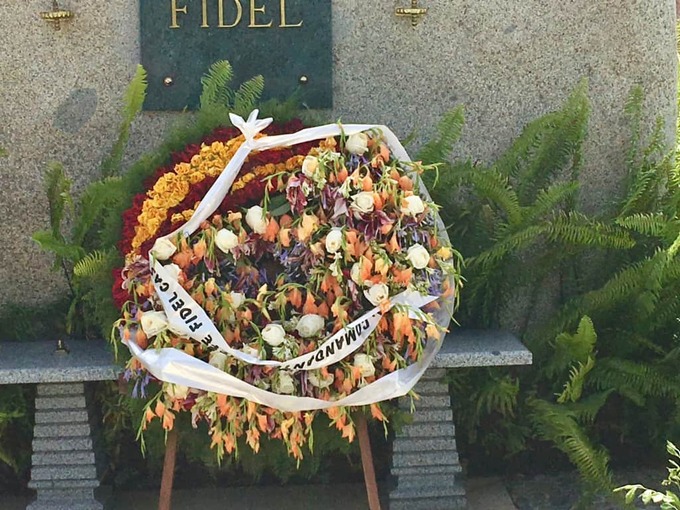 I stopped by Castro’s grave at the Cementerio Santa Ifigenia. It is unpretentious, but always adorned with fresh flowers from the Cuban people who still love and adore him. A visit to this cemetery is highly recommended as there is a ceremonious changing of the guards which is quite spellbinding to witness. 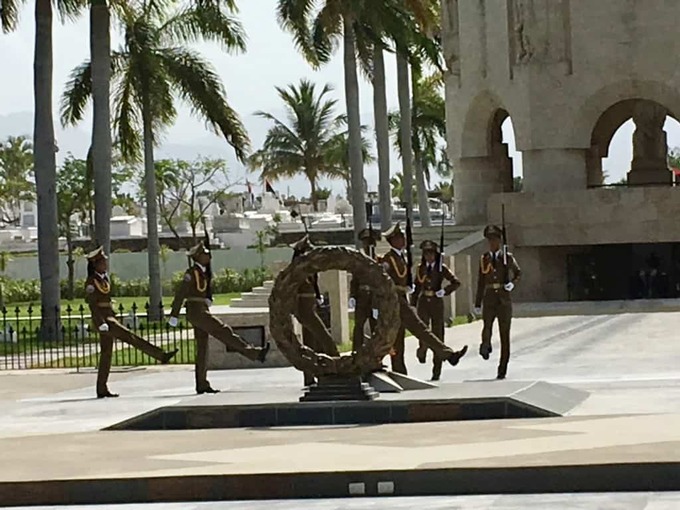 It was quite something to witness the changing of the guard ceremony at the cemetery in Santiago de Cuba where Fidel Castro is buried. 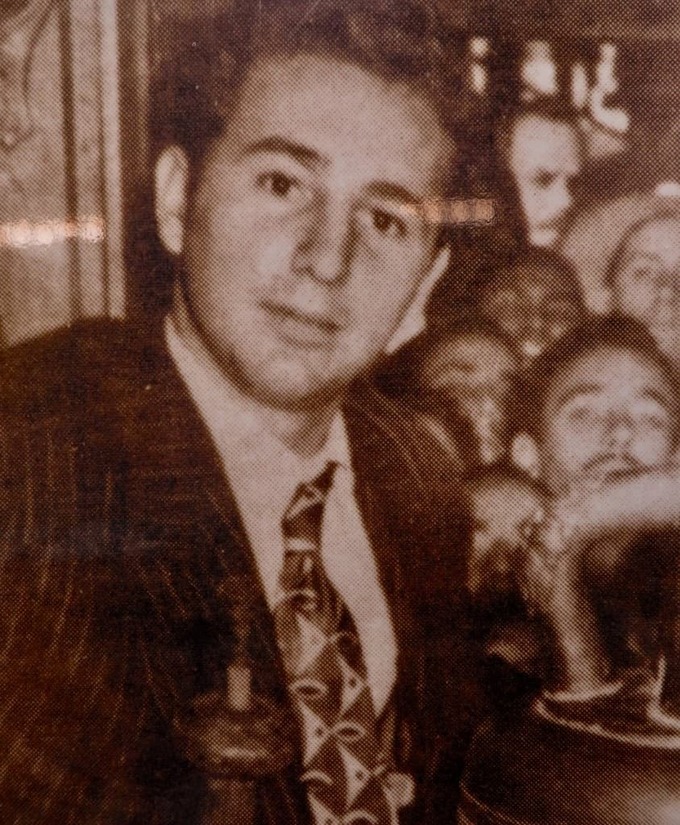 At the Museo 26 de Julio (named in honour of the 26th of July in 1953 when Fidel Castro led a team of communist rebels to topple the Batista government) I learned all about the revolution and Castro himself. That is a young and quite dapper Fidel Castro pictured above. 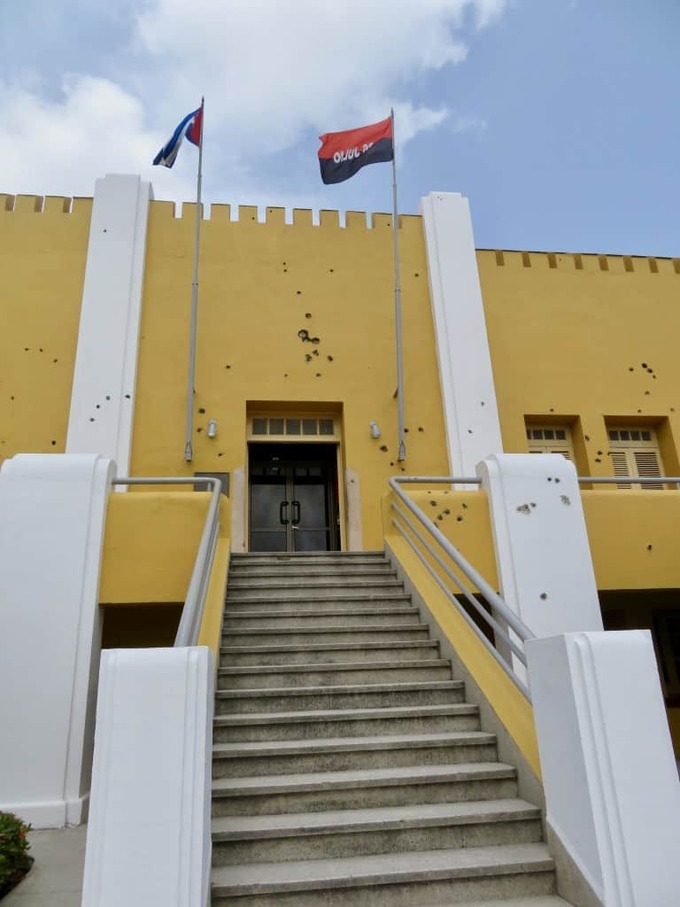 The Museo 26 de Julio in Santiago de Cuba shows bullet wounds from the battle of 1953 that launched the Cuban Revolution. 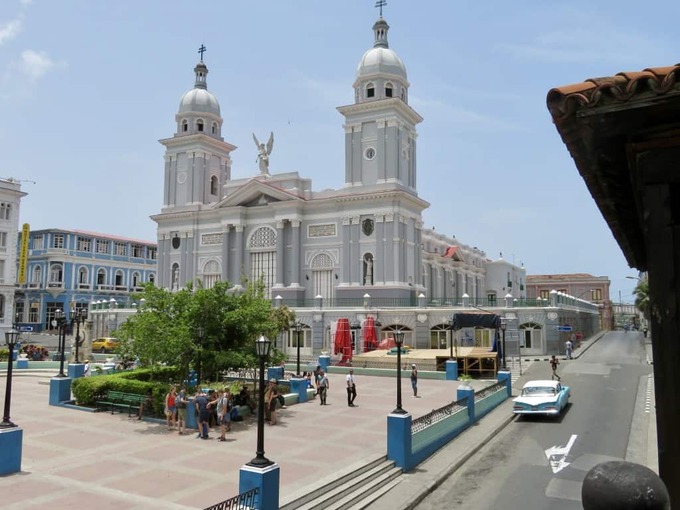 The downtown central plaza of Santiago de Cuba is quite beautiful.

But Santiago isn’t all about the revolution. It is extremely proud of its vibrant cultural scene of music, arts, and culture. I loved visiting Casa de la Trova, a small whole in the wall gathering place where locals come to listen to and perform live music, sing along, have a drink, and dance. All are welcome to participate in any way they choose! 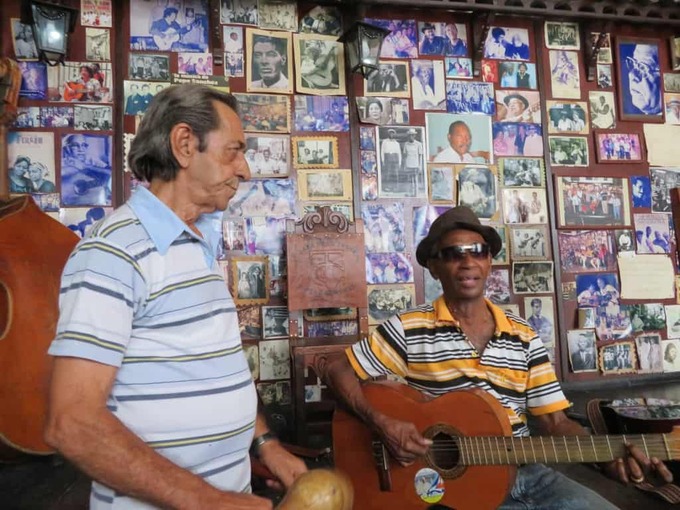 Casa de la Trova in Santiago de Cuba is a terrific place to learn about Cuban music, feel the music, and learn to dance! 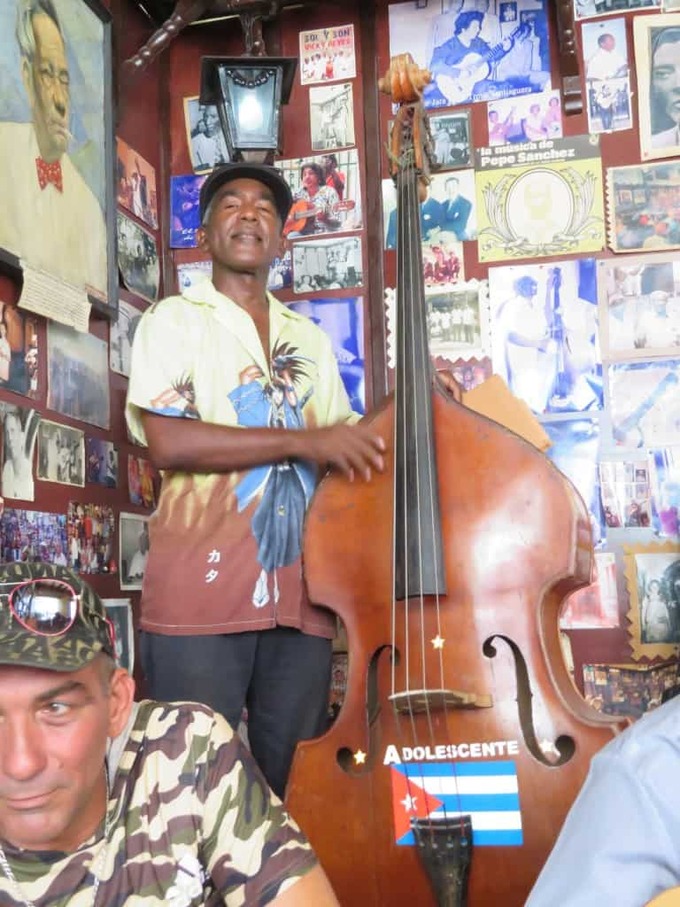 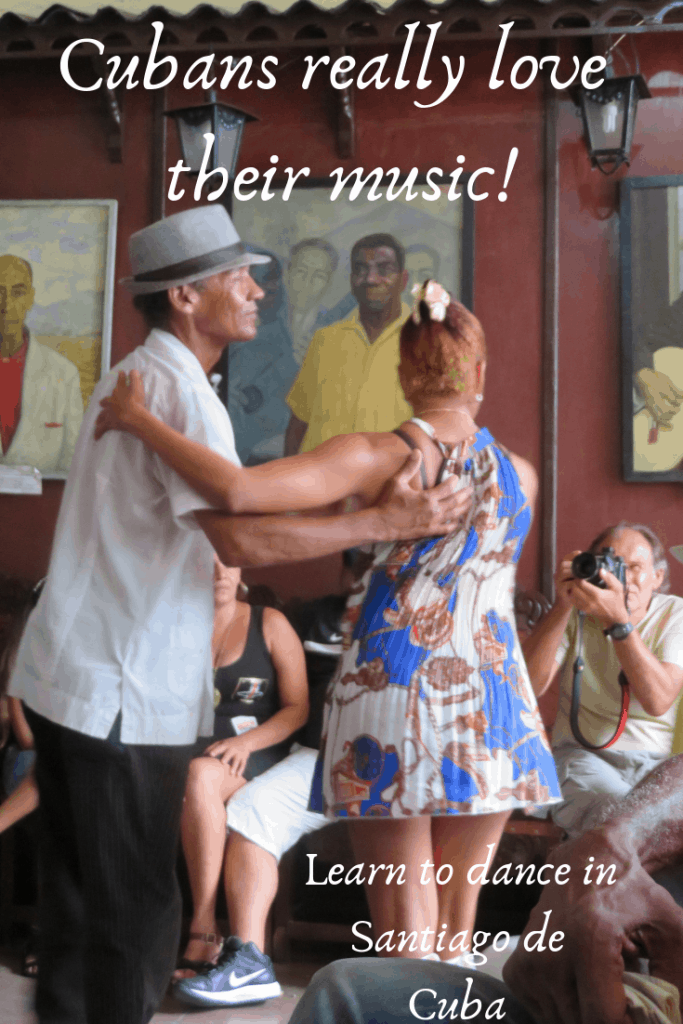 It was amazing visiting Castillo de San Pedro de la Roca (also known as El Morro Fort) built in 1638 to protect Santiago de Cuba. The setting is breathtaking! And I really enjoyed lunch at the adjacent El Morro Restaurante Palmares that has terrific food accompanied by live music, magnificent views of the Caribbean Sea, the fort, and the port. 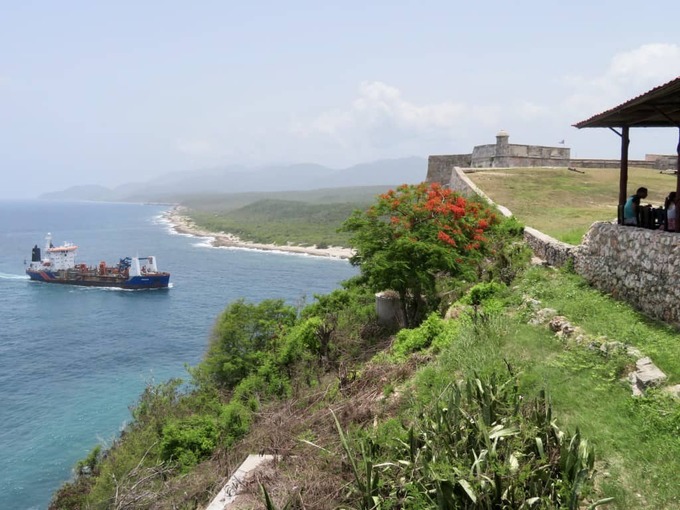 The views from El Morro Restaurante (located next to the fort) are truly breathtaking. 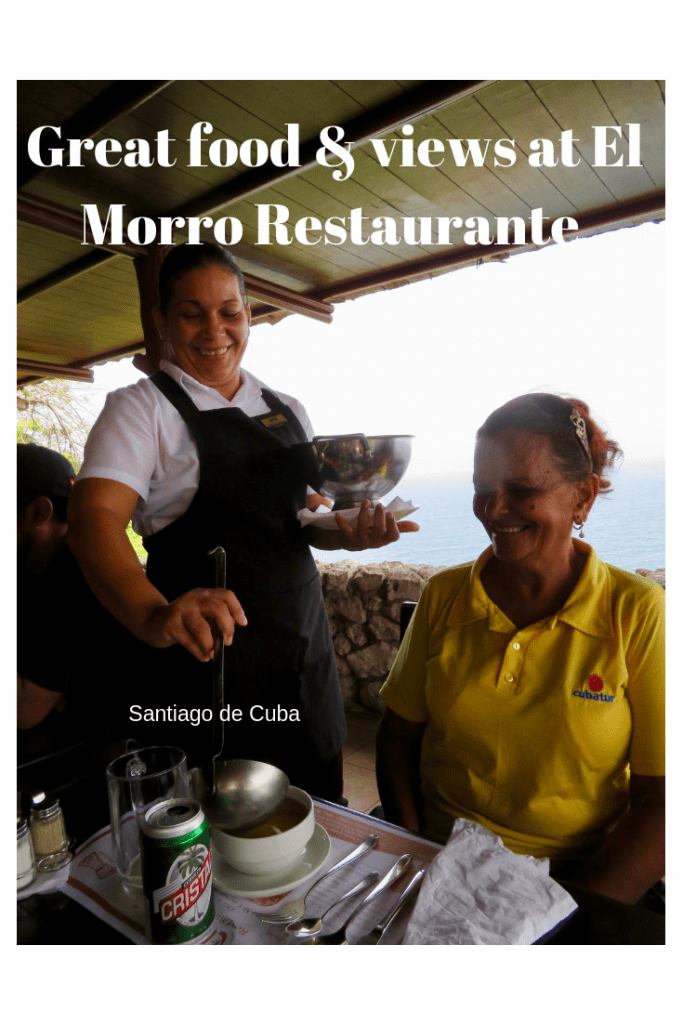 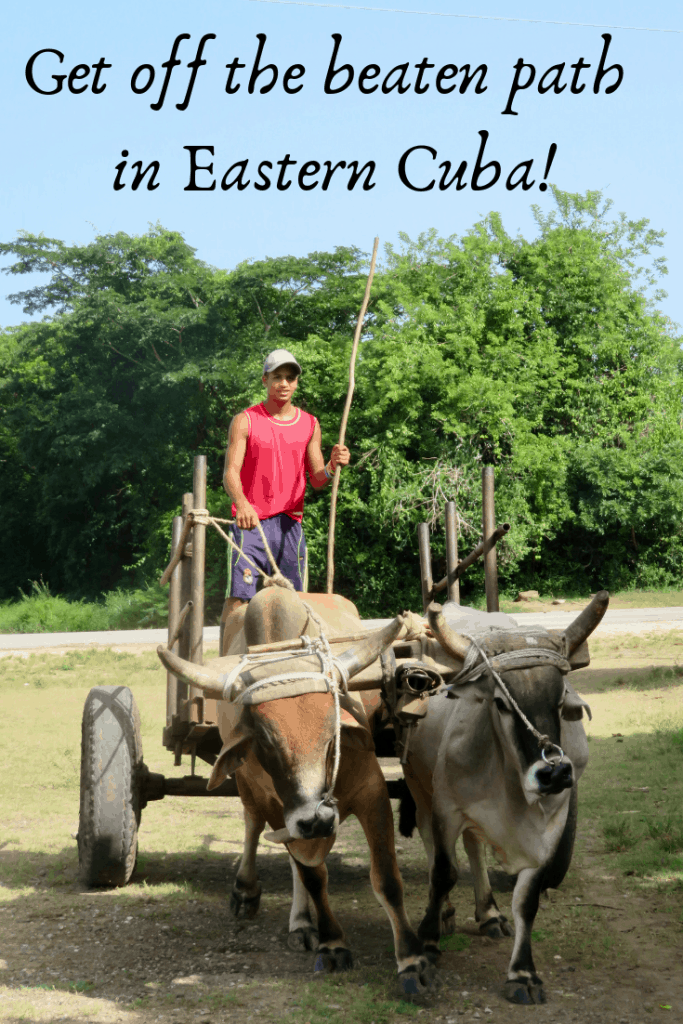 On my previous trips to Cuba, I’d spent more time on the beaches and in resorts than I did on the streets learning about the local culture. I was infinitely grateful to have the opportunity to get off the beaten path and learn about Cuban culture and traditions and would like to express my gratitude to the Cuban Tourist Board for covering the costs of my visit to Santiago de Cuba and other points in Eastern Cuba.