When I was growing up and through my early adulthood, spring was my favourite season. Mainly because there were no bugs in spring, and I really hated insects of all kinds. It was more terror than hatred. I was really terrified of bugs. Especially ones that flew around you — like wasps, bees and moths.

Thinking back, I can recall numerous (now) hilarious stories of me vs the flying insect. I very rarely won. Come to think of it, I was pretty scared of hopping insects, too, and vividly recall the night when I was about 16 years old and cornered in my Dad’s basement by a totally aggressive cricket that was not at all intimidated by my large broom or shrieks of terror.
Those of you who have been reading my work for awhile may recall when I referred you to an article I wrote about the challenges of country living. The piece mentions my horrific experience of coming home from work to find the house full of honey bees and refusing to go back into the house until the next day — when all the flying menaces were dead.  And there’s the time when Reg and I were cruising on his motorcycle along a scenic highway on a hot summer day. All of a sudden, I stood up and began screaming! Reg turned around and looked at me (while trying to keep the bike upright at a speed of 100 kilometres per hour) only to find me waving my arms in terror. A bumble bee had flown into me and stung my arm (I was wearing a sleeveless top.) I’d swatted him and he now lay squirming on the seat where I had been sitting!) Fortunately, we (Reg and I) got out of that situation unharmed. The bee was not so lucky. 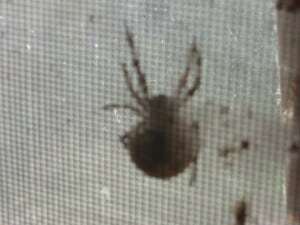 Spiders are definitely not my favourite thing.

But back to changing perceptions — the theme for today’s blog. Having spent the past 37 years living outside the city of Winnipeg has made me deal with my fear of insects. I have had to learn to live with the flying, biting, crawling and swarming bug*ers because in the country, you cannot escape them. You are living in their territory. One of natural beauty and home to all of nature’s creatures. So be it. I may not like or welcome the bugs who share my space with me, but generally, they no longer send me screaming like a wild woman.
So now … summer is my favourite season. I can live with whatever insects God sends my way. Just bring on the sun, the heat, days at the beach and enjoying the best of what Manitoba has to offer. Enough of this schizophrenic, long, tiring, dirty and threat-of-flood season we call spring.
Share
Tweet
Pin
Share