for the love of Junior 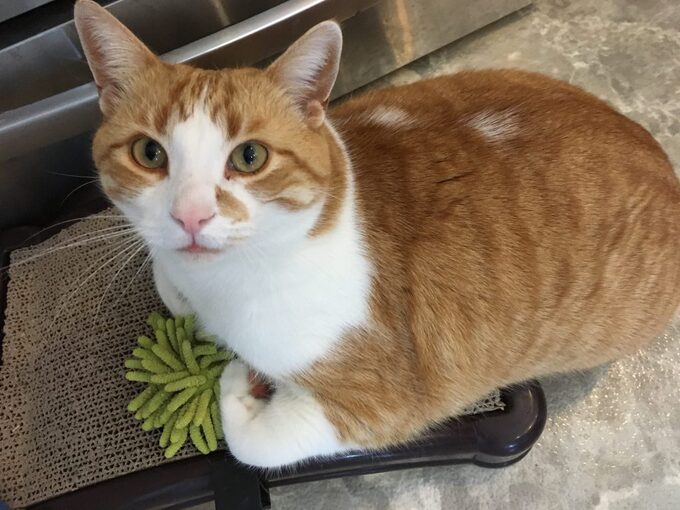 Jimmy was a super cat who got me through the pandemic.

Today is a very sad day for me, as my beloved cat Junior had to be put down. He was almost 15 years old, had kidney disease, and for the past six days, hadn’t eaten or drank anything. He was being kept alive by intravenous, and had been in the hospital since Tuesday morning. The good folks at Gimli Animal Hospital did what they could to clean out his clogged intestines, and encourage him to eat or drink. But all our efforts failed. It was his will to pass on, and we have respected that.

Thanks to my wonderful cousin, Esther, who saved this story I wrote about Junior back in 1999, when he arrived at our door as a stray of about 10 months old. I hope you enjoy it. It still makes my husband and I smile when we read it. Gone, but never to be forgotten. A tribute to Junior … 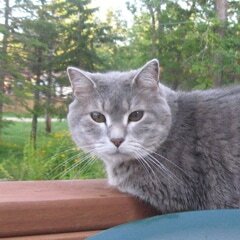 Junior sitting on his perch overlooking the yard and garden

My husband and I are both softies when it comes to nature. We feel sorry for all the wildlife – large and small – that calls our neck of the woods home, especially during our harsh Manitoba winters. So we feed the deer all winter long, and we feed the birds, chipmunks and squirrels all year round.

But when the little gray cat first appeared in our world, we tried to be tough. We were already nurturing the needs of our 17-year-old dying cat, Buzz, sick from the effects of cancer and kidney failure. And our other cat, 16-year-old Beaver, although not noticeably ill, had a heart murmur and a rather inhospitable disposition to boot. So there just wasn’t room for this new kid on the block who was hell-bent on moving into our abode.

We chased him off the porch day after day, gently tapping his little bum with the broom to show that he wasn’t welcome. But it had little effect. He kept coming back, each day more tenaciously vying for our affection.

The turning point happened the day I was entertaining a group of ladies outdoors for lunch. Our uninvited visitor showed up, turning on the charm full steam. “Isn’t he cute?” one of them said.

“And I can’t believe how much he looks like Buzz,” said another. It was true. The resemblance to our own dear Buzz, was uncanny. A gray tabby, with soft short hair and warm eyes that shone straight through to your heart.

“You know he’s chosen you, Doreen,” said a third. It certainly seemed that way. If I was in the kitchen, he’d be standing on the barbeque, looking in the window and meowing at me. If my husband and I were sitting in the living room, he’d be perched atop the air-conditioning unit or deck table, bent on catching our glimpse.

We’d been a three-cat household until last year, when we’d lost Buzz’s sister, Goldie, to cancer. But we thought we’d eventually either be cat-free and travel more – or maybe get a dog. The cats had been mine before marrying Reg, and he’d always been a dog person. But the cats had grown on him. And he was becoming increasingly fond of the little youngster who’d shown up on our deck.

I put a notice up at our local vet clinic to see if anyone would claim him. I even called the Humane Society in Winnipeg to see if he was reported lost. He had no collar and no tattoo. It was likely that someone had dumped him. He was at the age of puberty, when the cost of neutering and vaccines would become a factor. He’d probably had the misfortune of being placed into a family who liked kittens but not cats. Or he could have been a barn cat in search of a more comfortable lifestyle.

One thing was for sure – make that two things. He loved people, and he was determined to become a part of our little family. Slowly, I began to give him our cats’ leftovers or table scraps. He was always so grateful – for anything you’d give him. I think my husband took to him so intensely because he could identify with the young cat’s situation. He, too, had a difficult life. Things hadn’t come easily to him. He always told me, “If you want something, go out and get it,” – meaning don’t let life’s difficulties discourage you.

And there was also the way we’d gotten together. My husband, then co-worker, had wondered what it would be like to live with me. He’d camped out in my ditch on snowmobile with his friend, surveying the grounds, asking the neighbours about me. And look where he ended up.

So I think he easily found a place in his heart for this poor lost soul and one day gave me the go-ahead to take “Junior” to the vet to have his health checked over, get him vaccinated, neutered and tattooed. Junior had won. He was part of the family and he was moving in.

I hope you enjoyed that tribute to my dear friend. It was quite a flashback of memories for me, so many years later. The article had been published in a couple of rural lifestyle publications as I think many of us who live in the country could really relate to the showing up of unexpected strangers who become our friends.

Please share any stories you may have on the impact of cats in your life. ❤️