a salute to volunteers around the world

In honour of National Volunteer Week being celebrated April 19-25 throughout North America, I thought I’d start a discussion as to why we volunteer as I am often asked this question when interviewed about my new book, “Before You Say Yes …” a guide to the pleasures and pitfalls of volunteer boards.

Why do I volunteer? I think it is almost genetic with some of us. I grew up in a household in which volunteerism was the norm. My father volunteered for his union way back in the early 1950’s and was sent to NYC to learn from the big guys as to how a union should be run. He was also president of the church our family attended and had a key role with the Knights of Columbus. (I have no doubt he was also involved with his insurance brokers and realtors associations, but I can’t recall for certain and he has passed on.)

So when I entered adulthood and became a working woman, it seemed a natural thing for me to get involved in causes I believed in. To stand up and be counted. To make a difference.

I learned from an early age that I am a doer and usually become thoroughly engaged in any organization I join, preferring to engage in a course of action as opposed to sitting on the sidelines and complaining about the way someone else is doing things.

So I have been active on numerous boards and volunteered for a great number of organizations and associations over the past 30 years.

I have found my own situation to be similar to that of several of the uber-volunteers I interviewed for my book. They do it because they have grown up in families where volunteering is a part of life. A natural, welcome part of life. 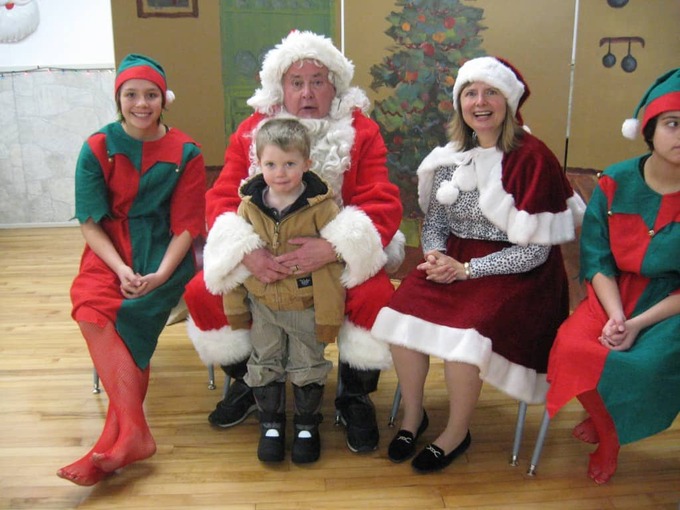 Reg and I enjoyed volunteering as Mr & Mrs Santa at the Matlock Hall.

They do it because they are filled with passion for a certain topic or organization and want to help makes things better. Making the world a better place. I think that is the spirit behind volunteerism for me.

How about you? What has driven you to engage in volunteerism? (Or are you just contemplating stepping into the forum?)

Does volunteering feed your spirit? Is it an innate part of you like it is for me?

Would love to hear your thoughts, and I salute everyone who gives of themselves to all the school boards, church groups, professional associations, hobby and community groups in every city, village and hamlet around the world.