dealing with unexpected delays when you travel

I was going to call this post Mosquitoes and Mudslides, as they were a prevalent part of our visit to Ecuador. But then I realized that was part of a bigger picture: what happens when your trip is delayed or impacted by an unexpected event or occurrence?

Making the most of unexpected travel delays

We had both factor into our one-week visit to Ecuador. We lost a full day at the Chocolate Jungle Resort (more on that destination in the next post) because the road we were travelling was closed for eight hours due to a mudslide. And my travelling companion was experiencing strange symptoms that made us think of malaria, so we spent a day in a Quito hospital while she was tested for everything under the sun. It turns out her ailment had nothing to do with those pesky mosquitoes, and Virginia’s condition was treated by the capable staff at Hospital Voz Andes. Here she is playing Drama Queen of Quito for the camera. 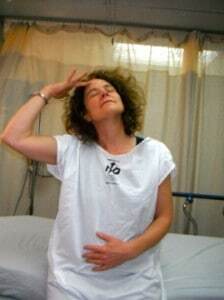 Were the symptoms deadly? Fortunately not, but they did cause us to spend a good number of hours in a hospital

The mudslide was just as dramatic. We left Quito in a small van with several other women who were travelling to Tena, the capital city of Napo Province. Tena has just under 35,000 residents and is a jumping off point for many people embarking on jungle expeditions as we were. As it turns out, everyone in the van was local and Spanish-speaking. Our driver couldn’t speak a word of English, but fortunately one of the fellow passengers not only spoke English very well, she is involved in the chocolate industry and is developing a cacao scrub and cream for sale on the commercial market. 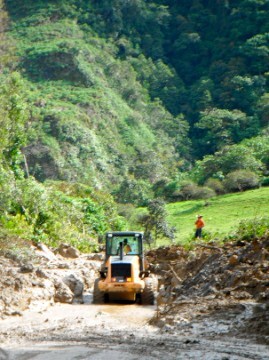 Believe it or not, there was a two-lane paved highway underneath all that mud! The derrumbe (Spanish for mudslide) caused a significant delay in our journey to Tena.

Our journey to Tena was to be a four-hour ride but turned out to take 12 hours as we were delayed in the mudslide zone for a full eight hours. Plus we had to overnight in Tena which hadn’t originally been planned. It turned out to be a pleasant diversion as we got to explore Tena a bit and stayed at an affordable hostel thanks to the fact that the family who owned La Selva Hostel was in the van with us and offered us a room at $10 per person.

After being stuck in a stopped van all day, we were starved by late evening and really enjoyed the “Americana Pizza” at Patto’s Pizza. The next morning  we discovered how delicious tree tomato juice is during our breakfast at the Cafe Tortuga, a terrific riverside cafe for chocolate lovers as they sell Kallari chocolate bars and offer a delicious banana and chocolate pancake to get your day off to a tasty start. The tree tomato is called a tamarillo in Spanish and looks like a giant plum while tasting more like a kumquat. (More on the Kallari cocoa cooperative and the delicious bars it makes in a later post.) 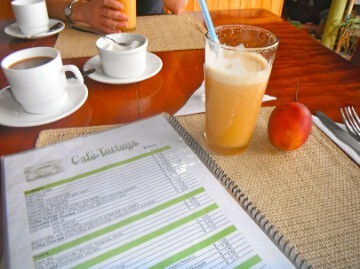 the tree tomato juice at Cafe Tortuga was delicious

We’ll never quite know the experiences we missed by having one less day in the Chocolate Jungle Lodge, but the time we did have there was unforgettable. Stay tuned the week of September 10th when we’ll show you the new friends that we met there.

In the interim, please share your thoughts by telling us about any unforeseen travel disruptions that changed your plans and perhaps added something you would otherwise have missed on your journey. Or did an unexpected delay completely spoil your trip and cause you to miss out on an opportunity of a lifetime? Sometimes travel diversions can be better than our original plans. Sometimes they are better left forgotten.