Chocolate Tour of Scottsdale: a great way to spend the day

In my previous post, I shared information about the Desert Botanical Garden and the natural topography and flora of the Sonoran Desert. In this post, I want to tantalize you with the various chocolate offerings you’ll encounter as a participant in the Chocolate Tour of Scottsdale. 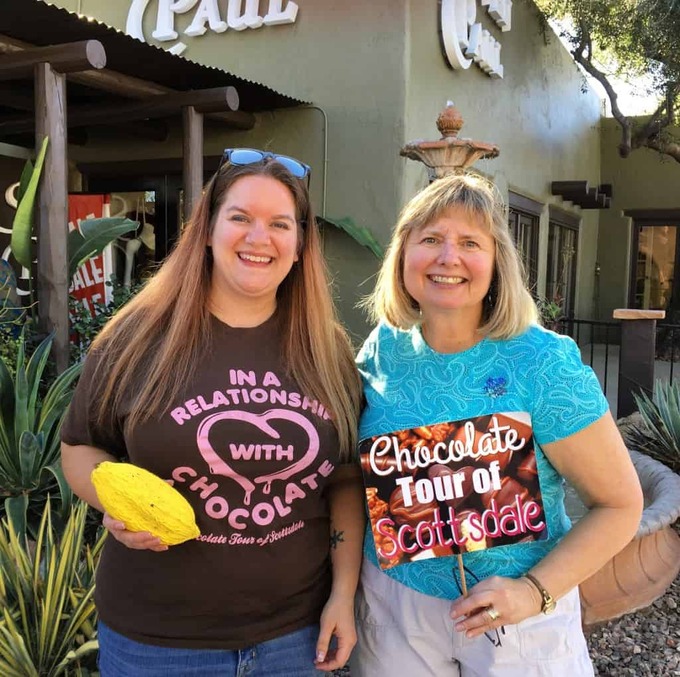 Gwendolyn McKay (left) is a chocolate enthusiast and owner of the Chocolatour Tour of Scottsdale company.

Owned by Gwendolyn McKay, this company takes you on a two-mile walking tour of downtown Scottsdale, that my friend Laverne equated to The Amazing Race for Chocolate. We were indeed on a mission to get to as many chocolate hot spots that our two-and-a-half hour tour would allow. 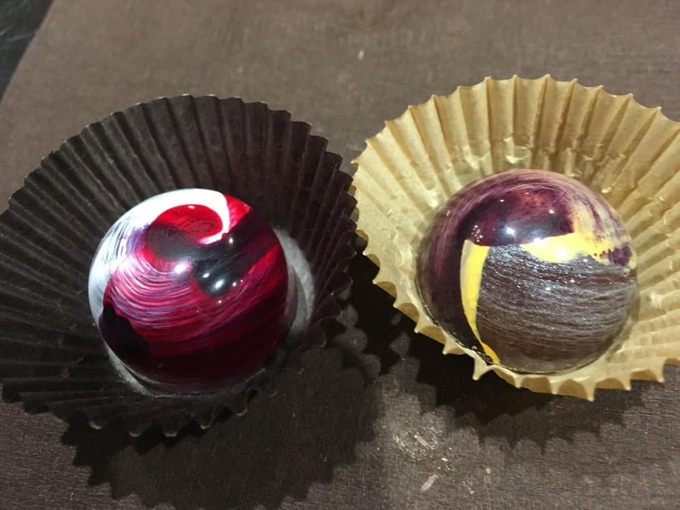 We had the privilege of a private tour with Gwendolyn and loved every minute of it. Her love for chocolate and admiration of cacao shone through with every step of our delicious journey that began at Paul’s Salon and Spa. (Don’t be misled by the name. Paul’s has a terrific boutique that is worth exploring if you arrive early for the tour.) We began with a patio tasting of an Earl Grey and Lavender bonbon from Zak’s Chocolate, located too far from the centre of Scottsdale to be included in the walking tour, but too good not to include. (I’ll share the experience of our private tour of Zak’s in a future post.) This award-winning company produces the finest bean-to-bar chocolate in Arizona, and also makes some dynamite truffles, bonbons, and confections. 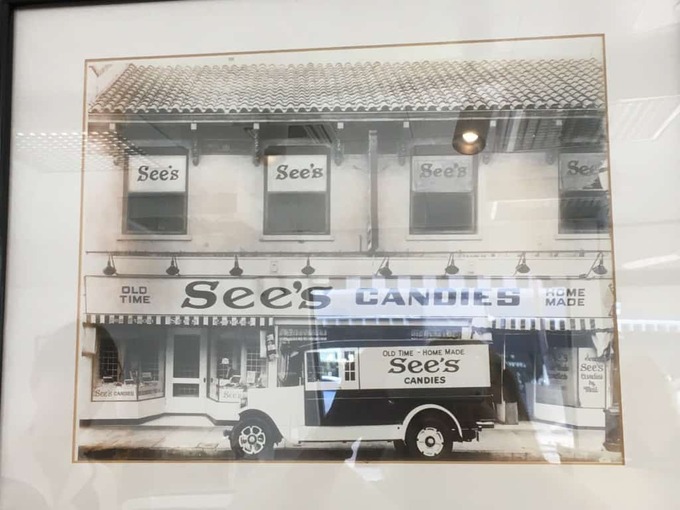 Our next stop on the tour was See’s Candies. This confectioner uses Guittard Chocolate of California to create their playful chocolate treats, and has been in business since 1921. Their motto is “Quality without compromise.” See’s products are preservative free and sell for the single price of $20.50 per pound. That makes it easy to mix and match anything you like into a single order. 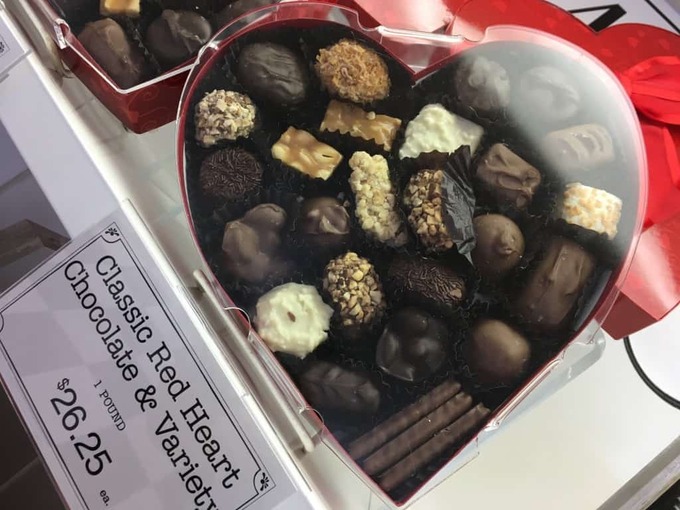 With Valentine’s Day on the horizon, I couldn’t resist the beautiful red heart box of chocolates, which I filled with the selections of my choice. Thanks to Gwen, that included several Scotchmallows made from See’s own honey marshmallows and a layer of caramel covered in rich, dark chocolate. They are fabulous! 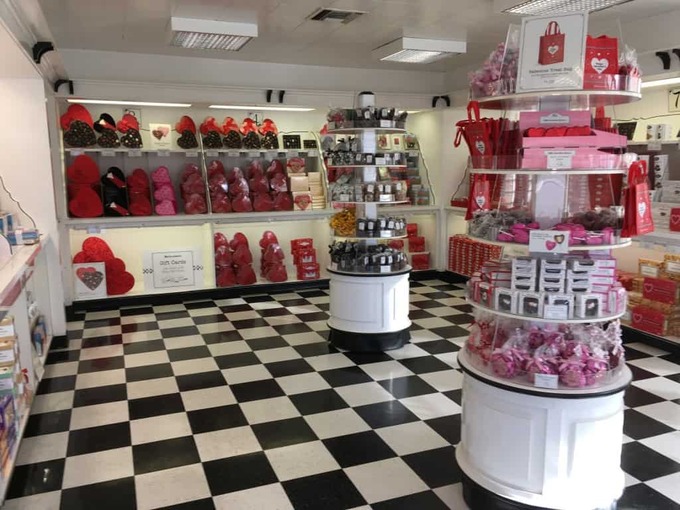 The black and white theme in See’s shops mirrors the colour theme found in Mary Sees’s own kitchen.

The black and white colour theme of See’s shops mirrors the colour theme in founder Mary Sees’s own kitchen, where she began making her candies. Founded in Los Angeles, California, See’s Candies now has more than 200 shops around the world that are serviced by their factories in Los Angeles and San Francisco.

Our next stop was the Herb Box, a locally owned company that serves up chocolate treats in addition to a full menu of incredibly healthy options. I’ll feature them in my upcoming post on fabulous culinary options of Scottsdale. Following our visit to the Herb Box, we stopped at sugarfina in Nordstrom’s, located in the Fashion Square Mall. The sugarfina company sells a cool assortment of chocolate offerings that include Cuban chocolate cigars made by Vendi of Italy, and gummies made with Casamigos Tequila owned by George Clooney. We then dropped into Caketini next door for a chocolate canolli. Caketini offers a nice assortment of super high cakes and truffle-type “cake pops” based on the owner’s family recipes. 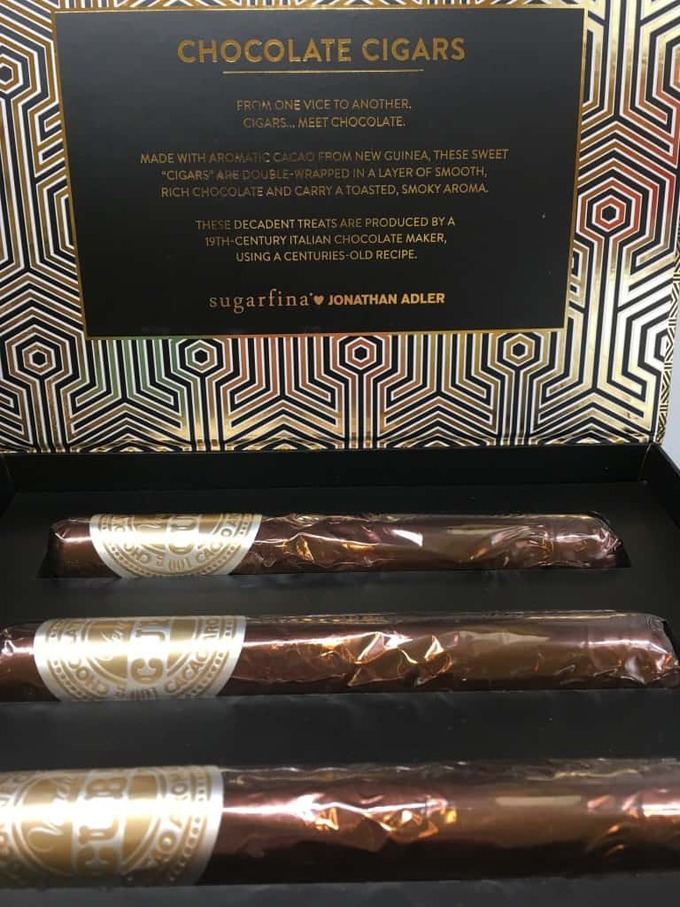 Ever wanted a delicious cupcake at 2 am, only to find your cupboard is bare and everything is closed? Fret no more. Our tour’s next stop was Sprinkles, where you can buy a cupcake from their street side “Cupcake ATM” that holds up to 540 cupcakes! Too much fun! 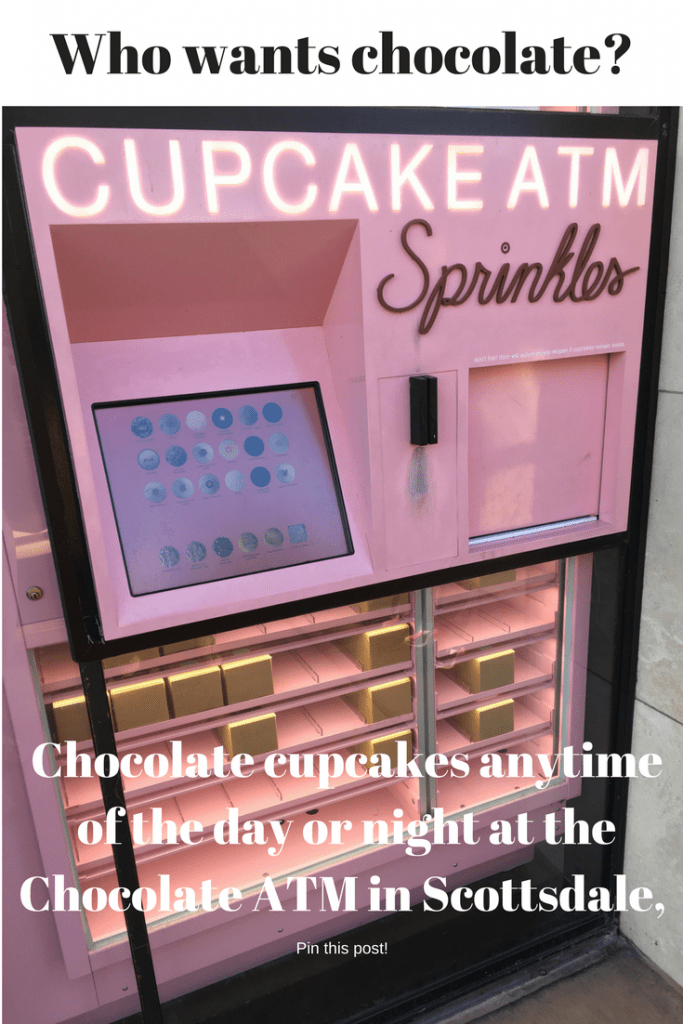 This chocolate cupcake ATM is located in Scottsdale, Arizona, and a stop on the chocolate Tour of Scottsdale. 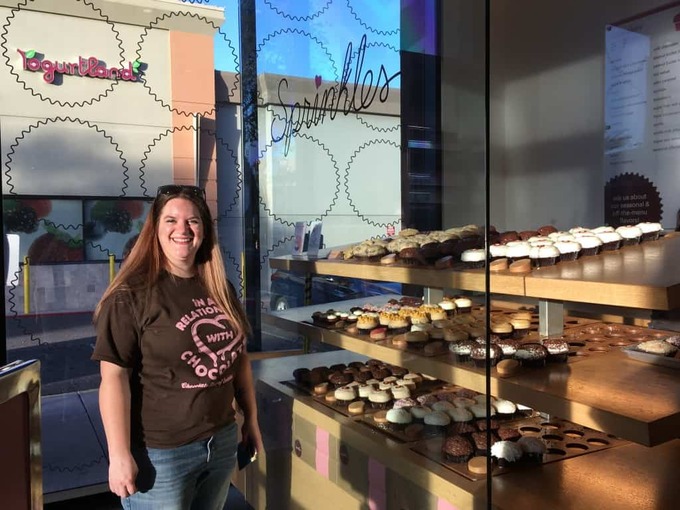 It was pretty hard to pry tour leader Gwendolyn away from the cupcake counter at Sprinkles, located at 4501 North Scottsdale Road to satisfy your late night cravings while in Arizona.

The tour’s final stop was at Classic Cakes Bakery, where we met owner Neil Levinson, who immigrated to Arizona from Montreal, Canada, with his family 20 years ago. In addition to truly artistic cakes, this shop offers super tasty novelties such as the Red Velvet Twinkies and S’more tarts and pies. 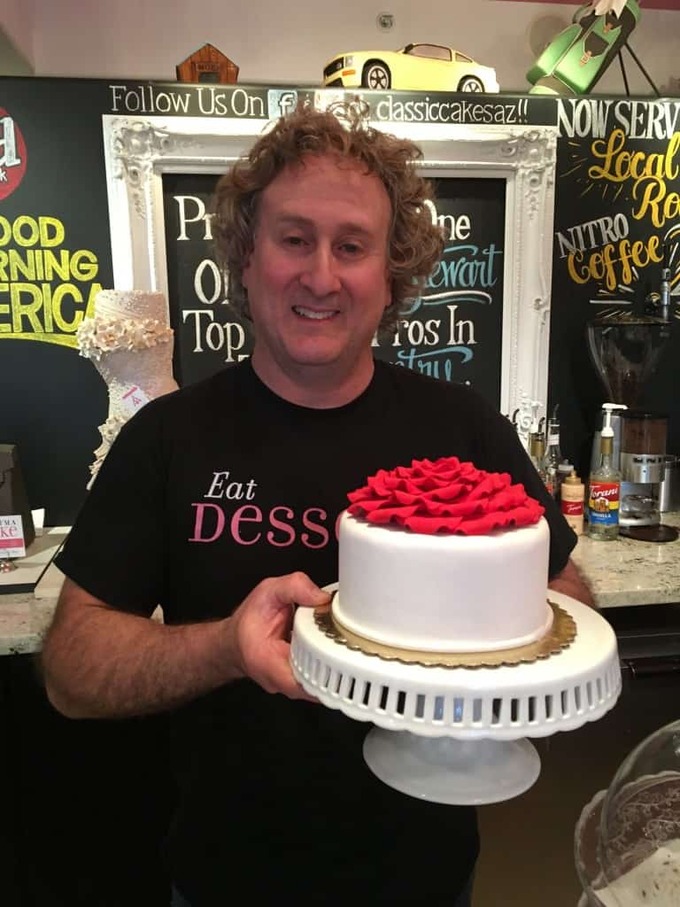 Neil Levinson and the team at Classic Cakes Bakery create some incredibly artistic cakes to admire and enjoy.

For the woman who has everything! A chocolate purse from Classic Cakes.

Chocolate Tours of Scottsdale are run seasonally from October to May, ceasing during the summer due to the intense Arizona heat. Tours can be customized for groups with special interests and are suitable for ages 8-80. The cost per person is $45 plus tax, which includes a selection of complimentary tastings. If you find yourself in the Phoenix area, do treat yourself to one of these taste-tempting tours with Gwendolyn. Your taste buds will love you for it.