Season’s Greetings to all my friends, followers, and fellow chocolate lovers. I am thrilled to celebrate this special week with a guest post from a colleague of mine who just happens to live in Bournville, England, home to the iconic British chocolate company of Cadbury. Many thanks to Ryazan Tristram, who brings us this insightful post on some special memories of Christmas in the land of Cadbury Chocolate. 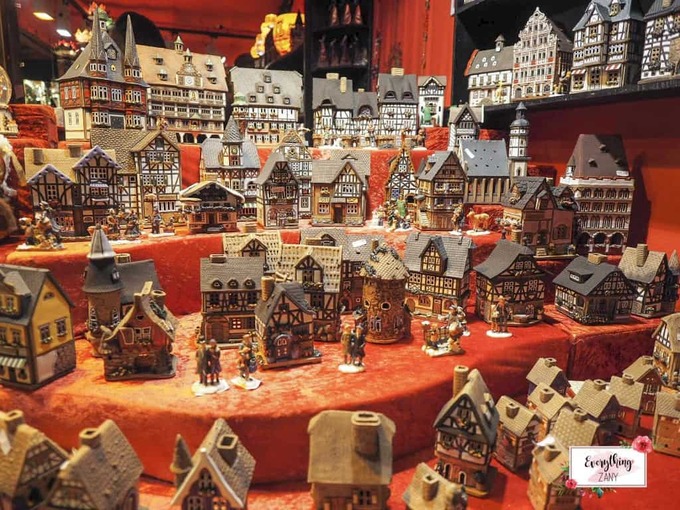 The German Christmas Market in Birmingham is filled with fun and sights. 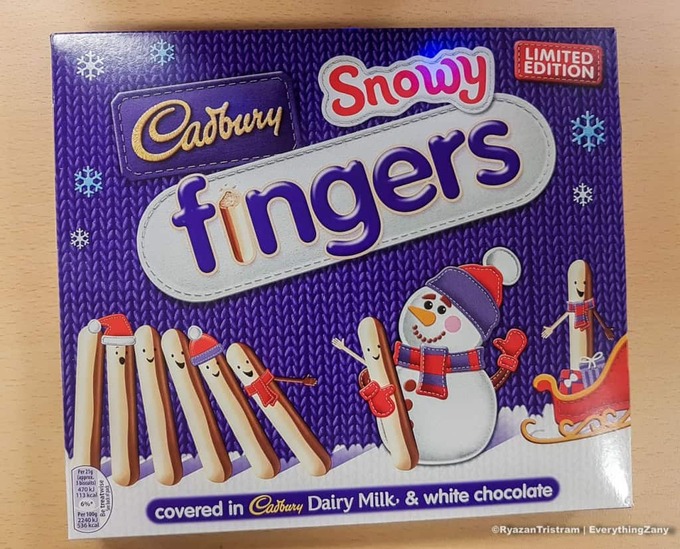 A Christmas without chocolate is incomplete. Birmingham is known for the famous Christmas Market in the UK and in Europe. Annually, people visit and enjoy the festive merriment in the city. Only a stone’s throw away from the festive market is Bournville, the home of the world most loved purple wrapped chocolate – Cadbury. Cadbury World is one of the points of interest in Birmingham for family and young at heart and includes a chocolate museum to explore. 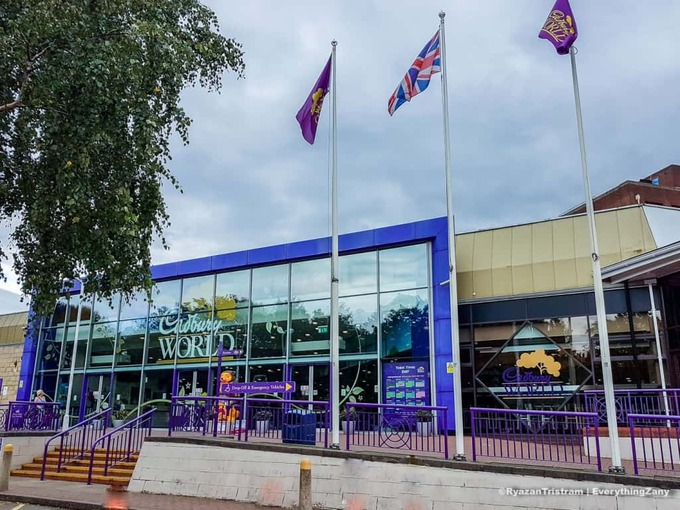 A visit to Cadbury World is a must for any chocolate lover who visits Bournville, England.

It is in Bournville where all the magic of this delicious chocolate is made. Cadbury’s first factory was built here by a British visionary, John Cadbury with a vision that changed the world of chocolate up to our current generation and surely many more to come.

A little history about Cadbury

In 1824, a young quaker named John Cadbury started selling tea, coffee, and drinking chocolate in Bull Street, Birmingham. John started small with a grocery shop at 93 Bull Street. The company he started would go on to become a world recognised brand, known simply as Cadbury Chocolate.

As a quaker, John believed that alcohol was the main cause of poverty and he wanted his products, such as drinking chocolate to serve as an alternative. The Cadbury family were devout Quakers and believed that all people should be treated equally. The true legacy of the Cadbury family is not the chocolate, but the social reforms they put in place. (Doreen’s note: The story and vision of John Cadbury must have been the inspiration for Milton Hershey of the US, who setup a very similar community-based Hershey Chocolate business in Hershey, PA.)

The vision of George Cadbury (John’s son) was to build good quality low cost homes in a healthy environment for his workers. This vision went on to become the area known today as Bournville. The Birmingham council preserved the legacy and wishes of the Cadbury family by maintaining the pub free zone in Bournville. 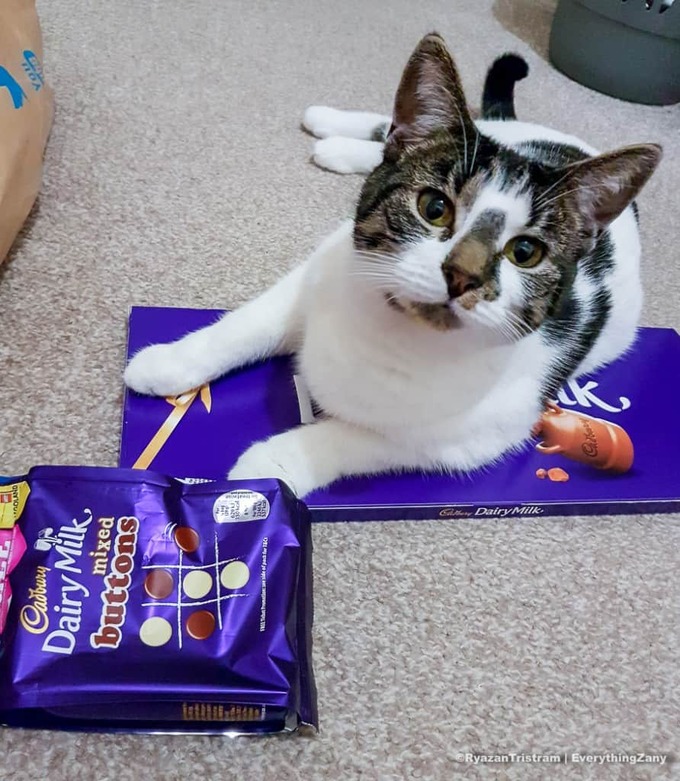 We all know you shouldn’t feed chocolate to your pets, but Lily the cat can still admire Cadbury’s shiny purple packaging. 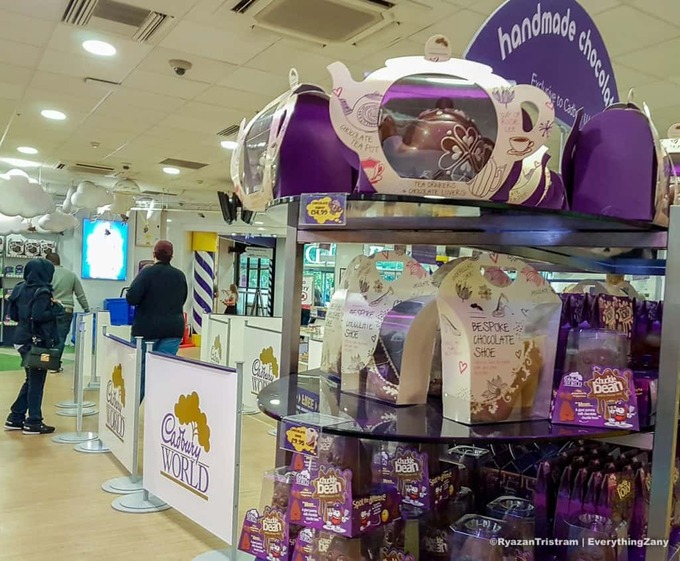 Cadbury World offers a wide range of Cadbury chocolate products to purchase for yourself or a gift.

I’ve never imagined that now that I’m living here in Birmingham–in the world of Cadbury where it all began–is just a stone’s throw away from me. There are many varieties of Cadbury chocolates that have been a favourite since Victorian times. Even Queen Victoria loved Cadbury Chocolate, giving the company Royal recognition from the Royal Household. 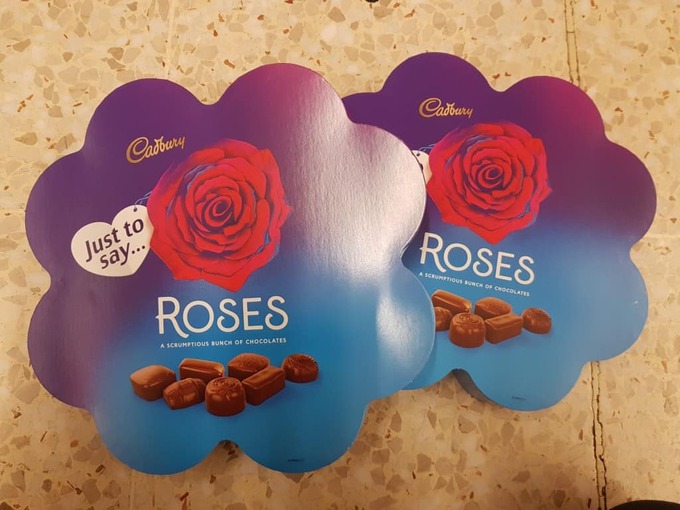 Cadbury Roses are an iconic product of the Cadbury chocolate company in the UK.

Christmas won’t be complete without a big tub of Cadbury Roses chocolates to share with your friends and family. The classic tub of Cadbury roses symbolises the beautiful roses in the garden of Bournville where the Cadbury factory was built. Cadbury Roses is more than just a mere chocolate but also a symbol of community built by the Cadbury family for their employees and well-being.

The classic flavours of Cadbury Chocolate are the Dairy Milk bar, Fruit and Nuts bar, Turkish delight, and Crème eggs–just to mention a few. The chocolates in Cadbury World also comes in various sizes and shapes. A pre-made special designed chocolate can also be ordered and the whopping 1 kilo Cadbury milk chocolate bars are also available.

My personal favourites are the Cadbury Misshapes, the kilo chocolate bar of Cadbury and the cute little chocolate frog called Fredo. Let us know if you have been to Cadbury World in Bournville! Please share your favourite Cadbury chocolates or memories in the comment stream below. 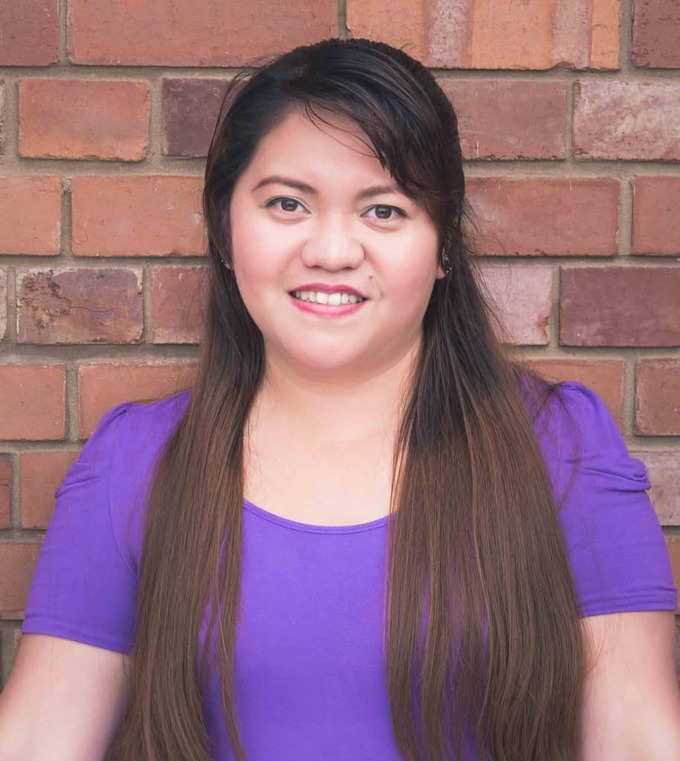 Many thanks to blogger Ryazan Tristram, the Miss Zan-shine of Everything Zany. She is named after a Russian city near Moscow. Ryazan likes to travel, learn about history, meet people, and try exotic foods! She is planning to explore more countries with her D.I.Y. trips as a Dual Citizen (British – Filipina). Find her at Everything Zany – A Photography, Lifestyle and Dual Citizen Travel Blog.

Doreen’s closing note: In a request from a reader via Twitter, I’ve been encouraged to bring the Cadbury ownership situation up to date, as much has changed within the company since 1969, when it merged with Schweppes, was then sold to Kraft Foods in 2010, and subsequently became a subsidiary of Mondelēz International. So it would appear that Britain’s flagship chocolate company is now under American ownership.

This newspaper article gives more details. Regardless of who now owns Cadbury Chocolate, it is indisputable that this iconic British chocolate company had a tremendous impact on the world of contemporary chocolate, and has inspired other companies like Hershey to form and have tremendous influence as well. Money can change ownership and procedures, but it cannot change history.